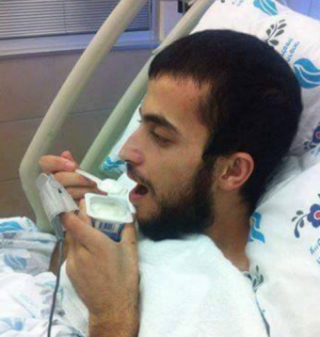 The Palestinian Detainees’ Committee has reported that detainee Malek Al-Qadi, who ended his 70-day hunger strike, on Wednesday, after reaching an agreement for ending his Administrative Detention, and setting a date for his release, will be sent home in two weeks after completing recovery an Israeli hospital.

The committee stated that Malek Al-Qadi is a free man, but will remain in intensive care at the Wolfson Israeli Medical, due to the near-death condition he reached during his strike.

It added that the physicians at the medical center advised against transferring him to another hospital, as this could seriously pose further health complications, and that he and his family agreed with the decision.

“Malek al-Qadi will remain in hospital as a patient, not a detainee,” the committee said, “He will be sent home as part of the reached agreement.

Al-Qadi was supposed to be discharged and sent home today, Thursday, but this could also cause complications and put his life at risk.

The agreement that was reached with the Israeli authorizes enabled Al-Qadi and the Balboul brothers, to end their hunger strikes.

The agreement also states that: