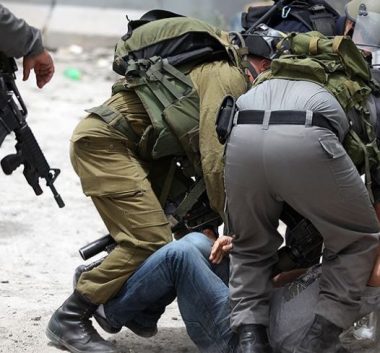 The Palestinian Detainees’ Committee revealed that three Palestinians from Bethlehem and Hebron, recently abducted by the Israeli army, were repeatedly assaulted, tortured, and injured during their arrest and their interrogation.

Jacqueline Fararja, a Lawyer with the Detainees’ Committee, visited the three detainees and listened to their testimonies.

The Committee stated that one of the detainees, Assef Da’amsa, 30, from Deheishe refugee camp, south of Bethlehem, was repeatedly beaten and struck with batons, causing fractures and bruises to his face and other parts of his body.

The Committee added that the detainee was later moved to the Etzion detention camp and interrogation facility and said that Da’amsa is also a former political prisoner who Israel imprisoned for seventeen months.

Another detainee, Othman Arafa, 24, from the Deheishe refugee camp, was abducted at a military roadblock near the Ath-Thaheriyya town, south of Hebron.

The soldiers stopped the young man, forced him on the ground before kicking and stepping on various body parts with their military boots, and moved him to Etzion.

A third detainee, Bilala Masalma, 22, from Beit Awwa town, west of Hebron, was assaulted in his family’s home after the soldiers stormed it, then forced him into one of their jeeps before the soldiers started kicking him and beating him with their rifles, and moved him to Etzion.

The Committee stated that the soldiers were hurling insults while assaulting and beating the three Palestinians.

It is worth mentioning that 44 Palestinians are held by the Israeli occupation army in Etzion and face very bad and difficult living conditions.