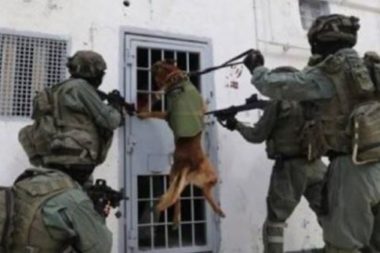 The Palestinian Detainees Committee has reported that the detainees in Ashkelon Israeli prison have decided to start a hunger strike, this coming Sunday, after preparing a list of legitimate demands.

The committee stated that the detainees will start removing all food products from their rooms, before starting the strike.

It said that the decision was made after the Israeli Prison Authority refused to remove a series of sanctions it imposed on them, including arbitrary transfers of detainees to other prisons, especially after it lately moved Nasser Abu Hmeid to Nafha prison.

The Committee stated that the detainees have announced the following list of demands:

The Committee stated that the Prison Administration has been escalating its violations against the fifty detainees in Ashkelon, including the constant nightly invasions and violent searches of their rooms, the repeated transfer of detainees from one prison to another, in addition to preventing 24 detainees from buying any food from the canteen.

It added that the prison authority also imposed fines on many detainees, and is ignoring the needs of ailing detainees.

One of the detainees is Ali Hassan, from the northern West Bank city of Qalqilia, who has been in solitary confinement for the last two weeks. After his abduction, the detainee was given an injection which apparently damaged a nerve causing him to depend on crutches to walk.