Rocket Strikes A Building In Sderot 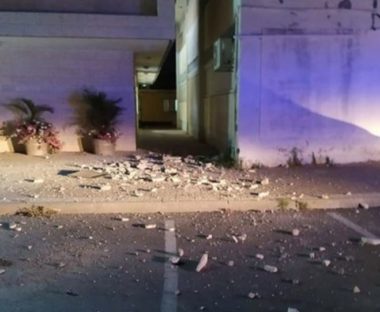 On Thursday, Israeli sources have reported that a rocket, reportedly fired from the Gaza Strip, struck a building in the Israeli Negev town of Sderot, causing damage.

Israeli daily Haaretz said the building which was struck by the rocket is part of a religious school, and that the building sustained structural damage; no injuries were reported.

It also stated that the rocket sirens were sounded in Sderot and Sha’ar HaNegev settlements, close to the border with Gaza.

Earlier Thursday, the Israeli army fired missiles at a tunnel on the Gaza border, and damaged it, and said the strike came “in retaliation to shells fired from Gaza” on Wednesday at night.

On Thursday at dawn, the army fired several missiles into Palestinian lands in Gaza city, and Rafah in the southern part of the coastal region, causing damage to nearby homes and buildings.

It is worth mentioning that, on Wednesday, the army imposed a strict maritime siege on the coastal region until further notice, for what it called “the ongoing flying of incendiary balloons from Gaza into Israel.”