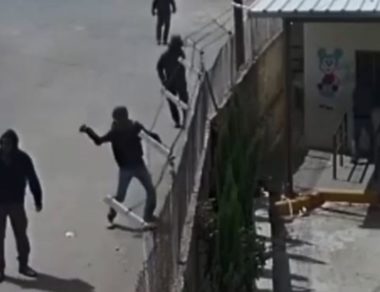 In an attack that took place, on Wednesday June 5th, illegal Israeli colonialist settlers were caught on surveillance recordings attacking a Palestinian school, and burning olive orchards, in Jaloud village, southeast of the northern West Bank city of Nablus.

The cameras show around 10 colonists throwing stones and invading a Palestinian school in the village, before smashing the windows of its small canteen.

The children in the school are also seen running away for shelter, to protect themselves from the invading colonists.

It is wort mentioning that the school is located near Palestinian orchards, that separate it from an illegal Israeli colony.

The assailants attacked the school approximately at 10:30 in the morning, when they started throwing stones, before invading it and damaging the small canteen in the school, while the Palestinian children as seen trying to escape the assault.

Shortly after attacking the school, the colonists invaded nearby Palestinian lands, and set them ablaze.

The fire spread fast before the Palestinian firefighters rushed to the area, and started extinguishing it.

Resident Malek Mahmoud Fawzi, who is one of the family members who own the orchards, said the trees were planted 65 years ago, and that the area contained around 1500 trees; nearly500 of them were burnt.

He added that he filed a complaint with the District Coordination Office, but the Israeli army or police did not even come to the area to inspect the damage, and stated that this is the second time the colonists burn his trees.

Israel later sent a firefighting aircraft to aid in extinguishing the fire, especially since they spread to areas close to the illegal colonies of Shvut Rachel and Ahiya, which were built in private Palestinians.

It is worth mentioning that Israeli colonists hurled stones at Palestinian cars in Yasuf village, southwest of Nablus, in addition to smashing the windows of a home while the family was inside, and also broke the windows of their cars and attempted to burn property.