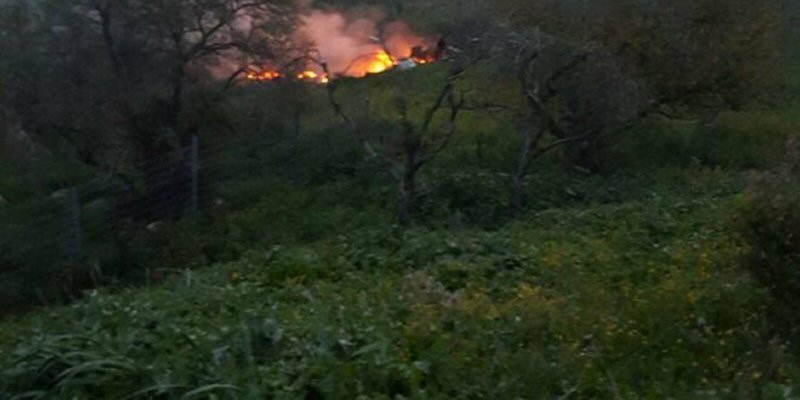 Israel has admitted the fall of one of its fighter jets that raided Syria, earlier this morning, after an Iranian drone was spotted and shot down in the Golan Heights, on the border with Syria.

The Israeli army said, Saturday morning, that it intercepted an Iranian drone launched from Syria into Israeli territory. In response to the provocation, Israeli forces attacked Iranian targets in Syria according Haaretz Israeli news paper.

According to the Israeli occupation army, Syrian anti-aircraft missiles targeted an Israeli F-16, prompting the pilots to eject.

The plane went down in northern Israel and the two pilots were taken to the hospital in stable condition.

Military spokesperson and Brigadier General Ronen Manelis said “We identified an Iranian drone UAV which took off from Syrian territory.

The spokesperson said the drone was identified by Israeli air force systems and was downed by an Israeli helicopter adding that the Iranian drone fell in our territory and is in our possession.”

“As part of the country’s defenses, sirens were activated but there was no danger for the residents of Beit She’an. It was decided to attack the trailer from which the Iranians launched the UAV. This was a surgical action deep in Syria, target destroyed.”

The Israeli army spokesperson added :”This is a serious Iranian attack on Israeli territory. Iran is dragging the region into a situation in which it doesn’t know how it will end. We are prepared for a variety of incidents…whoever is responsible for this incident is the one who will pay the price.”

Due to Syrian anti-aircraft fire, says the army, rocket sirens sounded in multiple areas of northern Israel, first in the northern Israeli town of Beit She’an and later in the surrounding areas and Golan Heights.

Residents reported hearing many explosions in the last half hour and heavy aerial activity in the area near Israel’s borders with Jordan and Syria.

The Syrian army and rebels in the Syrian Golan Heights are currently exchanging heavy fire.

PNN further reports that the Russian Foreign Ministry has called to respect Syria’s sovereignty and the territorial integrity of the countries in the Middle East following the aerial attacks of Israeli Occupation Forces against the targets in central Syria.

“Moscow is deeply concerned with the latest developments and attacks on Syria. The danger of the escalation of tensions within and around the de-escalation zones, which has become an important factor in reducing violence in Syria is of particular concern,” the Foreign Ministry said in a statement posted on its website.

The statement reads that the Syrian government forces “are complying with the existing arrangements to provide the consistent functioning of the de-escalation zone in the south-west of the country.”

“We urge all the involved parties to exercise restraint and avoid any steps that could lead to aggravation of the situation. We consider it necessary to unconditionally respect the sovereignty and territorial integrity of Syria and other countries of the region.”

Israeli occupation military spokesman  said on Saturday that Iran and Syria were “playing with fire” but noted that Tel Aviv was not seeking an escalation after Damascus downed an Israeli F16 fighter jet which was striking military post in Syria.

Occupation military spokesman Jonathan Conricus told journalists in a phone conference the Syrians and Iranians were “playing with fire”  adding that the israel was “not looking to escalate the situation.”

“This is the most blatant and severe Iranian violation of Israeli sovereignty in the last years,” Conricus said, referring to what he described as an Iranian drone entering the so-called “Israeli airspace” from Syria.

“That’s why our response is as severe as it is.”

Earlier on Saturday, Syrian air defenses shot down an Israeli F16 fighter jet, which was taking part in a new aggression against Damascus in the country’s center. Two Israeli pilots ejected from the fighter jet, with one seriously injured, according to Israeli media.

For his part Lieutenant commander of the Islamic Revolution Guards Corps warned the Israeli regime of a hell that Iran could create for Israeli Zionists, saying all American military bases in the region are within range of Iranian strikes.

The Iranian forces can destroy all American bases across the region by launching attacks from inside the country, Brigadier General Hossein Salami said on Saturday.

Iran can create a hell for the Zionist regime of Israel, the commander added, recommending the Tel Aviv regime to abandon the dream of conquering lands from “the river to the sea”, a term Israel uses to refer to territories from the River Jordan to the Mediterranean Sea.

His comments came after the downing of an Israeli warplane by the Syria Army.