Dr. Al-Kaila: “One-Third Of The Slain Palestinians Are Women And Children” 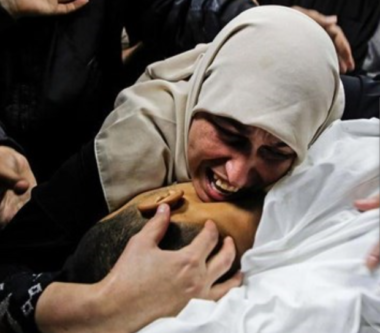 Palestinian Health Minister, Dr. Mai al-Kaila, has reported that one-third of the Palestinians, who were killed by Israeli missiles and shells in the three-day offensive on Gaza, are women and children.

In a press release, Thursday, Dr. al-Kaila stated that the Israeli army killed 34 Palestinians in its offensive, which began on Tuesday at dawn and ended with a ceasefire, on Thursday morning.

She said that the Israeli army killed eight children and three women, and added that 111 Palestinians, including 46 children and 20 women, have been injured.

“This terrifying fact proves that Israel committed a serious crime, a premeditated murder of children and women,” she said, “This is not an accidental killing, or a mistake, but rather a deliberate, calculated policy.”

The Minister stated that the international community must end its silence and idleness, and act on providing the needed protection to the Palestinian people.

“Israel obliterated families; one clear example of that is Abu Malhous family that lost eight of its member due to the Israeli missiles,” she concluded, “Moreover, the psychological trauma, the grieve, will continue to impact the lives of hundreds of Palestinians.”

Besides destroying or damaging dozens of homes, the Israeli missiles caused damage to fifteen schools in the two days of ongoing bombardment.

Six schoolchildren were killed, and many others were injured, in addition to the dozens of children who suffered extreme anxiety attacks.

The Israeli missiles caused damage to 185 homes, and destroyed five other homes, in several parts of the Gaza Strip.