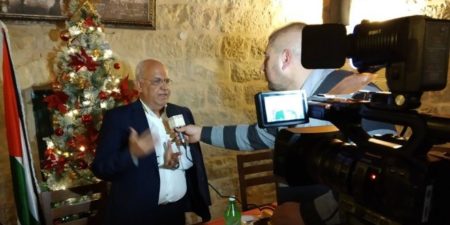 Saeb Erekat, head of the National Committee responsible for following up on the International Criminal Court (ICC), today, confirmed that “the decision announced by the Office of the Prosecutor of the International Criminal Court (ICC) to request an opinion by the Pre-Trial Chamber regarding the scope of the Court’s territorial jurisdiction in the situation in Palestine is a positive and encouraging step that brings us closer to the opening of a criminal investigation into the war crimes committed in Palestine, putting an end to the impunity of the perpetrators and contributing to the achievement of justice.”

Erekat clarified: “The step taken by the prosecutor represents a confirmation of her position that the ICC has territorial jurisdiction to examine the ongoing crimes that are committed by Israel, the Occupying Power. It is the final step towards opening a criminal investigation, and it is a message of hope to our people, the victims of those crimes, that justice is indeed possible.”

He expressed hope that the Pre-Trial Chamber will end its consultations in order to conclude the preliminary examination and move immediately to the investigation. “Any delay in opening the investigation and in seeking accountability against the criminals, results in more suffering for the Palestinians people as a result of the daily crimes of the Israeli occupation,” he said, according to the PNN.

Erekat added, “Israel’s hysterical reaction is that of a state that has put itself above international law, with a system of laws aimed at normalizing the situation of perpetual occupation, colonial-settlements and annexation, all of them inconsistent with international law. The State of Palestine has sovereignty over its territory on the 1967 borders, including East Jerusalem. According to the Rome Statute, the accession of the State of Palestine to the International Criminal Court gives the court full legal authority to pursue war crimes committed by the occupation over the territory of Palestine.”

He concluded: “While Israel, the occupying power, insists on violating its obligations under international law and UN resolutions, Palestine will provide all the required support and cooperation to the court, as it has done since its accession to the Rome Statute and the start of the preliminary investigation.”

WAFA further reports that Prime Minister Mohamed Shtayyeh said the announcement of the Prosecutor constitutes a stand for justice and truth, adding that “we will make every possible legal effort to try Israel for the war crimes it committed against our people in the Gaza Strip, Jerusalem and the West Bank.”

Shtayyeh added, in a statement issued by his office, Friday evening, commenting on the announcement, that “this step strengthens the confidence of the Palestinians in the integrity of the international human rights institution and its standing alongside justice despite all the pressures that Israel exercised and is exercising on it.”

The Prime Minister saw this long-awaited decision as “a significant and remarkable change in the International Criminal Court’s handling of Israeli violations of our people, and a victory for right and justice over the arrogance of power and attempts of criminals to escape justice.”

Shtayyeh urged the Pre-Trial Chamber to expedite the issuance of the decision and not waste any more time in opening a formal investigation into the international crimes committed against the Palestinian people, stressing that files were presented with evidence and detailed reports on the crimes of the occupation.

The Prime Minister said that the negative Israeli reaction to the decision “reflects fear of exposing the true face of Israel as an occupying power that violates human rights and violates international law in the worst way.”

Shtayyeh considered the ICC decision, which came weeks after the European Court of Justice’s decision to label settlement goods and the sweeping UN vote in the United Nations General Assembly to re-new the mandate of UNRWA, as “a revival of the Palestinian cause in international forums despite all American and Israeli attempts to abolish Palestinian rights.”