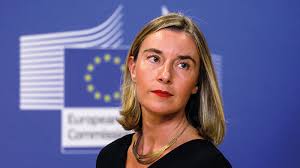 The European Union is sticking to its stance that Israeli settlement constructions in Palestine are illegal under international law, a long held view Washington has now begun to dispute.

“The EU calls on Israel to end all settlement activity, in line with its obligations as an occupying power,” EU foreign policy chief Federica Mogherini said in a statement.

Mogherini was reacting to US Secretary of State Mike Pompeo’s abandonment of the US four-decade-old position that building settlements for the Israelis in Palestinian territories is “inconsistent with international law,” PNN reports.

Much of the international community regards the Israeli settlements as illegal because the territories were captured by Israel in the 1967 war and are hence subject to the Geneva Conventions, which forbids construction on the occupied lands.