Except In Ofer, Israel Denies Lawyers From Visiting With Hunger Striking Detainees 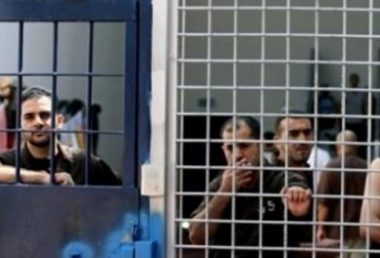 The joint media committee of the Palestinian Prisoners’ Society and the Palestinian Detainees’ Committee, has reported in a press release, Sunday, that the Israeli Prison Authority is still denying all lawyers’ visitations with the hunger striking detainees, except for those held in Ofer prison.

The committee stated that this illegal ban is now facing ongoing legal efforts, including various appeals, while human rights groups, including organizations defending the detainees’ rights, are preparing to file an appeal with the Israeli High Court.

It also stated that the lawyers, who requested to meet with hunger striking detainees in different prisons, have faced repeated denials, under various allegations, including, the claims that certain detainees have been transferred to other prisons, and in some cases, the lawyers were allowed to visit with detainees who have not joined the hunger strike yet.

The committee added that the administrations in Asqalan, Majeddo and Ramla prisons, have denied all visitations with the hunger striking detainees, while Eshil and Nafha claimed they are still deciding on the issue.