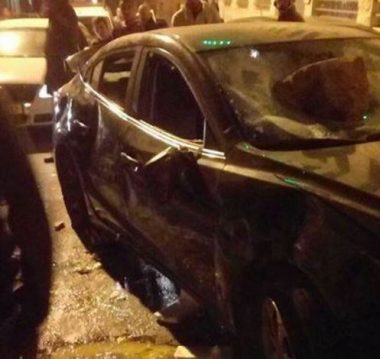 Palestinian medical sources have reported that two children were injured, on Sunday evening, after being struck by a speeding Israeli settler’s car, while walking with their parents in Sur Baher town, south of occupied East Jerusalem.

The sources stated that Mohammad Mousa Attoun suffered a head wound, while his sister, Nada, suffered several cuts and bruises.
An Israeli ambulance was called to the scene, and moved the two children to a hospital for treatment; their condition has been described as stable.

Eyewitnesses said a settler, who was accompanied by a passenger, entered the center of town from its main road, and was speeding through its streets, apparently while being chased by an Israeli police car, before ramming the two children in addition to striking several parked cars.

The settlers fled the scene, and hid in a medical center, before dozens of soldiers invaded Sur Baher, clashed with many local youths, and evacuated them.

In Ramallah, several military jeeps and trucks invaded Bani Saleh village, northwest of the city, and searched many homes before abducting two children, identified as Ahmad Tamimi, 15, and Mohammad Tamimi, 14, and took them to an unknown destination.