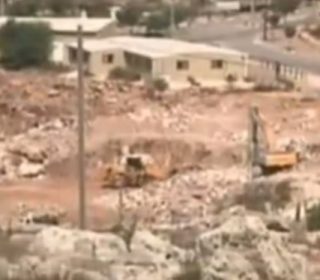 A group of armed extremist Israeli colonizers continued, Sunday, the uprooting of Palestinian agricultural and grazing lands, south of Nablus and Salfit in the occupied West Bank, and built several units in an attempt to expand the illegal Shvut Rachel colony.

Eyewitnesses in Jaloud village, south of Nablus, said several Israeli bulldozers uprooted Palestinian lands in Basin 13, in order to expand the Shvut Rachel colony, where they started building many residential units outside of it boundaries, far away from any media attention.

They added that the colonists were also uprooting lands near the outpost of Ge’olat Zion, that was illegally installed on private Palestinian lands, before Israel later retroactively “legalized it.”

In addition, extremists from the Leshem illegal settlement, also built on private Palestinian lands, started the infrastructure work for constructing hundreds of units, instantly after Israel “legalized” it two days ago.

Media sources in Deir Ballout town, near Salfit in central West Bank, said the illegal work is being conducted daily, east of the town, under army protection.

Palestinian researcher Khaled Ma’ali said the Israeli colonialist activities are simultaneously taking place in dozens of areas in the occupied West Bank, and that the Salfit district alone is witnesses ongoing work for the expansion of 24 colonies.

Ma’ali added that all Israeli colonialist activities violate Article 53 of the Fourth Geneva Convention prohibiting the destruction of private property in occupied lands, or their confiscation, and that Article 49, Section 6 of the same Convention prohibits the occupying force from moving all or part of its population into territories it occupies.