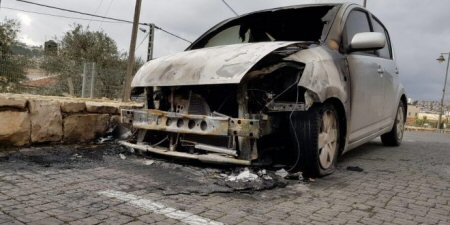 Settlers reportedly spray-painted “Death to the Arabs” and “Price Tag” in Hebrew, before setting a vehicle on fire, according to the PNN.

“Price tag” refers to an underground anti-Palestinian Israeli group that routinely attack Palestinians in the occupied territories and inside Israel.

The Israeli government still refuses to label it as a terrorist organization and considers it to be merely a group of vandals.

Settler violence against Palestinians and their property is routine in the occupiedWest Bank and is rarely prosecuted by Israeli authorities.

Settler violence includes property and temple arson — including churches — stone-throwing, uprooting of crops and olive trees, attacks on vulnerable homes, among others.

Between 500,000 and 600,000 Israelis live in Jewish-only settlements across occupied East Jerusalem and the West Bank, in violation of international law.

All settlements across the West Bank are illegal under international law, particularly with regard to article 49 of the Fourth Geneva Convention, which establishes that the occupying power shall not deport or transfer parts of its own civilian population into the territory it occupies.