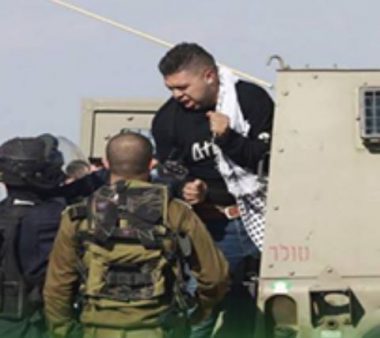 Israeli soldiers abducted, Friday, a young Palestinian man from Kafr Ra’ey village, southwest of the northern West Bank city of Jenin, after stopping him at a military roadblock, near Nablus, also in northern West Bank.

The Palestinian, identified as Aysar Samir Sbeih, 25, was driving to his work in Ramallah, in central West Bank, when the soldiers stopped him at a sudden military roadblock close to Shave Shomron illegal colony, which was built on Palestinian lands, owned by residents of Deir Sharaf and nearby villages.

The Palestinian was cuffed and blindfolded, before the soldiers took him to an unknown destination.

In related news, the soldiers stopped two Palestinian cars in the al-Lubban ash-Sharqiya village, south of Nablus, before searching and illegally confiscating them for what the army called “security considerations.”