Fadwa Barghouthi Reportedly Banned from Visiting Her Husband until 2019 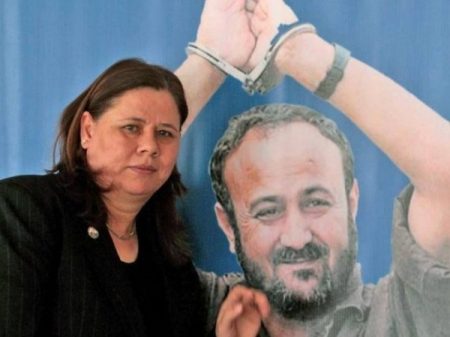 Palestinian lawyer Fadwa Barghouthi, the wife of prominent imprisoned Palestinian leader and Fateh central committee member Marwan Barghouthi, said on Monday, 4 September that she had been banned from visiting her husband until 2019 in retaliation for her involvement in supporting the prisoners’ hunger strike in April-May 2017.

Barghouthi said that she had been denied a visit to see her husband four months ago, turned back at an Israeli occupation checkpoint. Donia al-Watan reported that Barghouthi said she received a one-time visit permit from the International Committee of the Red Cross one week ago, and that she went in a group visit with other families. She remained at the prison from 9 am until 4 pm, only to be told that she was prohibited from seeing her husband.

She was told that she was banned from visiting all prisons and would not be allowed to see her husband until 2019, according to news reports. Barghouthi said that she was told specifically that this was a response to her support for the prisoners’ hunger strike.

Fadwa Barghouthi is the spokesperson for the International Campaign to Free Marwan Barghouthi and was a prominent advocate for the prisoners during the hunger strike for access to family visits and other key aspects of life inside the prisons. Thousands of prisoners participated in the strike and many have reported serious retaliation in the following months.