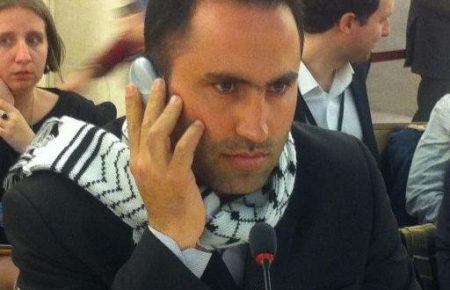 In a number of  emails sent to the PNN, the groups  expressed their unwillingness to accept the arrest, and consider it antagonistic to human rights of expression:

We are deeply concerned by the arrest of Human Rights Defender Mr. Issa Amro, which took place on Monday September 4th in the city Hebron by the Palestinian Preventive Security.

It has been said that the arrest took place after Mr. Amro criticized in a Facebook Post the detention of Mr. Ayman Qawasmeh, the director of Hebron-based Radio station Manbar al-Hurria.

Mr. Issa Amro is the coordinator for Youth Against the Settlements, a well-known organization working against Israeli settlement expansion in the Old City of Hebron. Mr. Amro is a well-known human rights activist advocating for non-violent resistance. Mr Amro, also has been subject of a number of legal proceedings by the Israeli occupation military courts related to his work as human right defender.

It is unacceptable that Human Rights Defenders and activists are being targeted by Palestinian Security Forces under alleged political instructions. This is causing undue burden to these organizations and threatening their invaluable contributions to our society, the advancement of human rights and to our national liberation struggle.

PSCC is concerned that this campaign will attempts to discredit and destabilize the work of human rights work in Palestine.

At a moment when the Israeli Government has stepped its attacks against Civil Society, we cannot tolerate for our own government under occupation to take steps against people that have shown their loyalty to the sacred cause of Palestinian freedom, liberation and return. Such activists and organizations are known for their promotion of human rights and international law. Many Palestinian officials have worked closely with several of our organizations, including with Mr. Amro.

We have supported the recognition of the State of Palestine and its access to several international treaties as a peaceful way to advance the national rights of the Palestinian people. Therefore it is a good time to remind the Palestinian Government of the obligations it has under the signed agreements, particularly when it comes to freedom of expression.

We would like to once again affirm the universality of human rights, including the right to freedom of expression in the International Covenant on Civil and Political Rights, ratified by the State of Palestine.

Therefore, we call on the Palestinian Security forces to immediately release Mr. Issa Amro at the same time that we call upon the Palestinian Government to take concrete steps to respect its obligations under signed agreements. Respect for human rights and national liberation should go on the same path.

For its part Palestine Solidarity Campaign (PSC) condemns the arrest of Issa Amro by the Palestinian Preventive Security Force and calls for his immediate and unconditional release. Issa was detained for criticising the Palestinian Authority for its arrest of a journalist in a Facebook post.

PSC Chair Hugh Lanning said: “I have met and worked with Issa and have huge regard for his courageous battle against injustice. He has spent his life defending fellow Palestinians against Israel’s increasing colonisation of Palestinian land.

The Palestinian Authority should be defending and supporting human rights defenders like Issa, not arresting them for expressing their views online.”

Issa has spent his life battling against injustice.

As the founder and coordinator of Youth Against Settlements, he has overseen a peaceful campaign of resistance to Israel’s increasing settlement expansion.

In 2010, he was declared “human rights defender of the year in Palestine” by the Office of the United Nations High Commissioner for Human Rights and is recognized as a human rights defender by the European Union. He has been subject to continued harassment from Israeli settlers and arbitrary arrest and detention by the Israeli state.

Issa is due to stand trial in November in an Israeli military court on a series of trumped up charges. Amnesty International has condemned Israel for their treatment of Issa and stated that if convicted, Issa will be considered a prisoner of conscience.