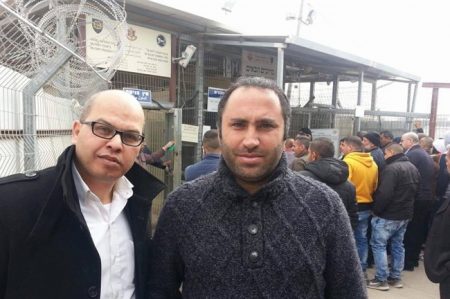 The two joined a number of Palestinians who have been detained for voicing their opinions since Palestinian President Mahmoud Abbas issued a a far-reaching Cyber Crimes Law in June that has been widely denounced by human rights groups.

Ayman Qawasmeh, the director of the Hebron-based radio station Manbar al-Hurriya, was detained by the PA on Sunday, three days after the radio station’s offices were raided and shut down by the Israeli army.

Local media reports said, according to Ma’an, that Qawsmeh’s arrest came after he called on Palestinian President Mahmoud Abbas and Prime Minister Rami Hamdallah to resign.

In a Facebook post Sunday evening, Amro, a Hebron-based coordinator for Youth Against Settlements and a former field researcher for the Israeli NGO B’Tselem, criticized the PA for arresting Qawsmeh and stifling freedom of expression.

Amnesty International called Amro’s arrest by the PA “a shameless attack on freedom of expression.”

“It is outrageous that a prominent human rights defender has been arrested simply for voicing his opinion online. Criticizing the authorities should not be a criminal offence. Issa Amro’s arrest is the latest evidence that the Palestinian authorities are determined to continue with their repressive campaign against free speech,” Magdalena Mughrabi, Amnesty International’s Middle East director, said.

“We have seen an alarming escalation in the Palestinian authorities’ clampdown on freedom of expression in recent months. Instead of continuing to step up their efforts to quash dissenting voices, the Palestinian authorities should immediately and unconditionally release Issa Amro and stop harassing and intimidating activists and others for daring to speak their minds freely.”

The human rights organization has highlighted “a chilling escalation in attacks on media and freedom of expression by both the Palestinian authorities in the West Bank and the Hamas de facto administration in Gaza, detaining a string of journalists and shutting down opposition websites.”

The PA’s new Cyber Crimes Law, issued by presidential decree in June, has been described by rights groups as “draconian” and “the worst law in the PA’s history,” for imposing jail time, hard labor, and fines for creating, publishing, and sharing information deemed dangerous by the PA. A number of journalists have already been detained under the new law.

The PA has also been the target of condemnation for its policy of security coordination with Israeli forces — particularly since Israel has long been criticized for suppressing Palestinians’ freedom of expression, by jailing hundreds of journalists, activists, and average citizens for social media activity.

However, reports have emerged that PA forces have been secretly continuing security coordination by carrying out a number of arrests, while Israeli forces have continued to violently raid PA-controlled areas of the occupied West Bank on a daily basis to detain Palestinians without interference from the PA.