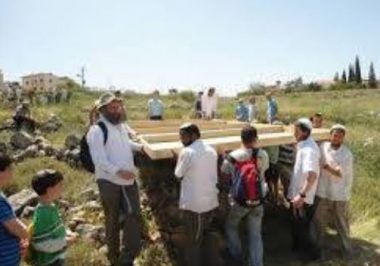 A group of illegal Israeli colonists invaded, Monday, privately-owned Palestinian lands in Jaloud village, south of the northern West Bank city of Nablus, and installed mobile homes and a tent, in an area just a few meters away from a new under-construction colony.

Ghassan Daghlas, a Palestinian Authority official who monitors settlement activities in the northern West Bank, told the WAFA Palestinian News Agency that the colonists prepared a road leading to the newly installed homes, which were set up on nearly 30 Dunams of agricultural lands.

Daghlas added that the Israeli army recently prevented the Palestinians from entering their lands to harvest their wheat, and today, the colonists started installing their new colony on the same lands, just meters away from “Amichai” under-construction illegal colony, which is being built to relocate colonists who were removed from Amona colonialist outpost this past February.