Family of 7 Ordered Out Of Their Home In East Jerusalem 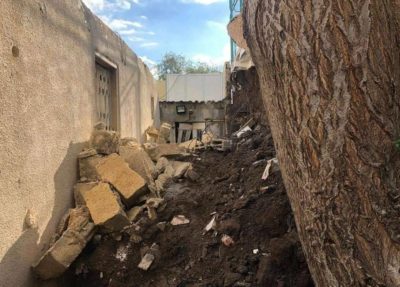 On Saturday, a Palestinian family of 7, was ordered by the City Council in Occupied Jerusalem, to vacate their home in Wadi Hilweh neighborhood in Silwan town, the Wadi Hilweh Information Center in Silwan (Silwanic) has reported.

The Israeli explanation for the order, was the collapse of a portion of the wall around the home of Mufeed Abu Rmeileh.

Abu Rmeileh told Silwanic that he heard a noise outside, investigated, and found the 4 meter cement block wall, had crumbled, and was blocking the home’s entrance.

He added that, over the past few days, Israeli colonialist settlers placed mounds of rubble, sand and stones against the wall surrounding his house while they were building a playground on a land adjacent to it.

Silwanic also reported that the City Council sent an engineer who decided that the home became unsafe, and could collapse, before he issued an order to vacate the building along with an external room adjacent to the property.

It is worth mentioning that Mofeed’s brother, Abdullah, and his family of nine, live right next door, and the collapse could also destroy their home.

Silwanic warned that the ongoing digging and excavations carried out by the “Elad” Colonialist organization under the Palestinian homes, and around them.

It also warned that Israel uses these eviction orders, which in this case are under the guise of safety, in order to remove the Palestinians from their homes and lands, which are eventually used for its illegal colonialist activities.

In addition, Silwanic said that the ongoing digging is threatening the entire Palestinian neighborhood, especially since many homes and roads now have cracks that are gradually expanding.

It called on all local and international legal and human rights groups to intervene and pressure Israel into stopping the illegal excavations and the construction of underground tunnels, as they are causing serious damage to many homes and buildings in the area.