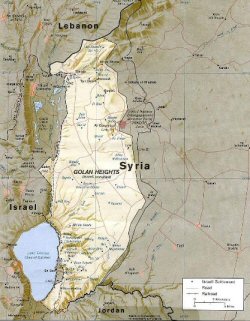 A press release by Al-Marsad said it “vehemently and unequivocally” rejects the recently submitted resolution, introduced by Senators Ted Cruz and Tom Cotton, which demands that the US recognize Israel’s claim over the occupied Syrian Golan because the Golan is “critical to Israel’s national security.”

“This resolution is abhorrent because it ignores international law, the context of the situation in the Golan and the realities of the region,” said Al-Marsad, an independent and the only human rights organization in the Golan.

“Israel’s invasion and occupation of the Golan has led to countless violations of international law. The United Nations has repeatedly condemned Israel’s incursion into the Golan and subsequent occupation. The resolution emphasizes that Israel’s assault on the Golan was ‘defensive.’ This is irrelevant under international law, which outlaws all land acquisition through the use of force. Additionally, Israel has violated international law and committed war crimes in its occupation by building 34 settlements and 167 settlement businesses to utilize the Golan’s resources without regard for its native population after forcibly displacing 130,000 people and razing 340 native Syrian communities,” it added, according to WAFA.

“The resolution completely disregards the context of the Golan, where occupation has caused rampant discrimination and human rights abuses. The remaining native population of the Golan is essentially stateless, faces countless discriminatory occupation-based laws, is ed in its educational opportunities, has virtually no room for economic growth (especially compared with their settler counterparts), possesses deteriorating infrastructure and is under constant threat from Israeli military actions in the region (including the persistent danger of 1.2 million landmines). Israel’s occupation has forced native Syrians onto just 5 percent of the land they once owned and ruined virtually all native industries except for some basic agriculture. The Israeli occupying authorities have destroyed almost all meaningful civil society groups and even systematically sought to exterminate native Syrian culture and identity.”

Al-Marsad added: “The resolution uses flawed logic and dismisses the realities on the ground in the region. Seizing land by force, no matter how strategic it is, still violates core principles of international law. Installing, on seized land, discriminatory policies that endanger and abuse native populations is a blatant war crime. Tactical significance is not a justification for violating the law and disregarding the fundamental rights of hundreds of thousands of civilians.

“The Golan is occupied land that belongs to Syria. Israel has no claim of right over the region. Israel’s aggression then subsequent occupation and unilateral annexation constitute obvious violations of international law. Ted Cruz, Tom Cotton and the US Senate have categorically condemned identical violations elsewhere. This resolution is the US’s latest move to recognize Israel’s control over the Golan as legitimate. It builds on the US’s vote last month, for the first time, against a UN resolution condemning Israel’s occupation of the Golan.”

Al-Marsad called on the US Senate to reject this resolution, “which supports illegal actions, cements systematic oppression and falsely characterizes the realities on the ground in the Golan.”