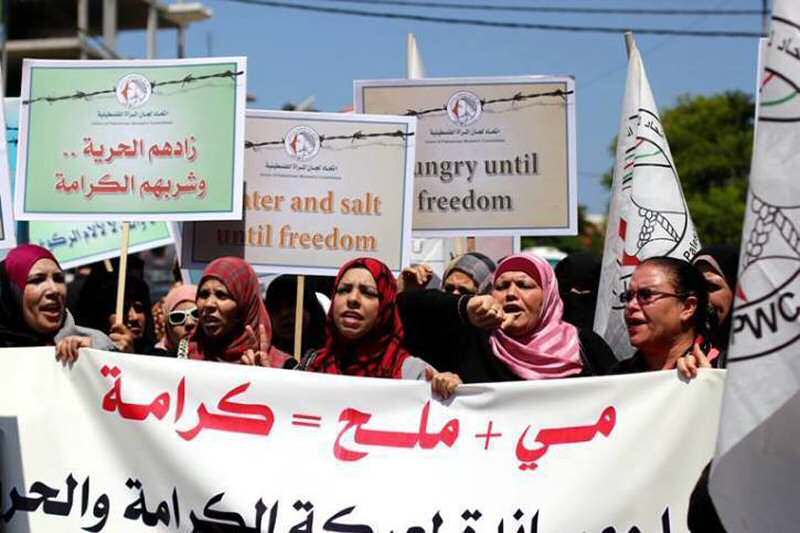 Palestinian women prisoners in Damon prison delivered an official letter to the Israeli prison administration, informing them of their intention to launch an open hunger strike on 1 July if their demands are not addressed. In a statement, former prisoner Mona Qa’adan said that 13 prisoners would launch the strike, led by Damon prisoners’ representative Yasmin Shaaban. Others who have announced their participation in the strike include women serving long sentences such as Shorouq Dwayyat, Amal Taqatqa, Nurhan Awad and Malak Salman.  She noted that all of the women prisoners are prepared to join the strike as it progresses.

The “Strike of the Free Women,” the name given the struggle by the women prisoners, will focus on a number of demands, including:

Qa’adan noted that these are simple demands, yet very important for the imprisoned Palestinian women, emphasizing their right to human dignity and a decent life. She urged all to stand with the women prisoners in this struggle to extract their rights. They have issued demands repeatedly and have found no relief but further repression; she said that they have no option but to strike to extract their legitimate rights.

The prisoners’ message is a call to the people and the masses, not simply to officials and institutions, to take an urgent stand on this issue in order to reach a solution so that it is not necessary to repeat this strike in order to defend the gains achieved by the prisoners through struggle, Qa’adan said.

The announcement comes after imprisoned writer Lama Khater, 43, was sentenced to 13 months in Israeli prison by the Ofer military court. Khater was seized from her home in al-Khalil on 24 July 2018. She was subjected to harsh and abusive interrogation in Ashkelon detention center and denied sleep for days. Khater was accused of “incitement” for her publications on social media and in the press; she was also accused of support for a prohibited organization. All major Palestinian political parties are banned by the Israeli occupation.

On 11 June, Nurhan Awad’s sentence was reduced to 10 years when she was successful in her appeal at the Jerusalem high court, Asra Media reported. Awad, 19, was only 17 when she was sentenced to 13 years in Israeli prison.  She was one of several Palestinian children targeted for extreme sentencing, especially Jerusalemite children. Nurhan was accused of attempting with her 14-year-old cousin Hadeel to stab a man with scissors: a 70-year-old Palestinian man was lightly injured. Hadeel was shot dead by Israeli occupation soldiers and Nurhan was shot with two bullets. After her cousin was extrajudicially executed, Nurhan was imprisoned.

Samidoun Palestinian Prisoner Solidarity Network calls on all supporters of Palestine and the Palestinian people to join the campaign to support the women prisoners. Palestinian women prisoners have been in the forefront of the prisoners’ movement over the years, including organizing multiple hunger strikes that played a significant role in securing key rights for the prisoners – the very rights now once again under attack. We urge supporters to organize events and actions, issue statements and build the campaign for boycott, divestment and sanctions (BDS) against the Israeli occupation state. Palestinian women prisoners are struggling for basic rights, dignity and justice – it is critical that we support their efforts.

Human Interest 06/08/19 ‘This Is For Palestine’: Mum Who Gave Birth Through Smuggled Sperm