Fire from Incendiary Kites Breaks Out in Israeli-Gaza Border Communities 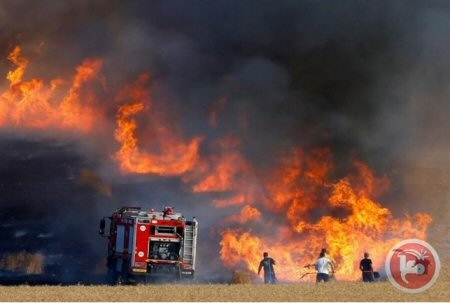 Thirty-three fires broke out on Sunday, in forests and agricultural areas of Israeli communities surrounding the Gaza Strip borders, by incendiary kites and balloons.

According to Israeli Ynet news website, since Sunday morning, Israeli firefighters have been attempting to extinguish all the fires outside the Gaza borders, and were able to control most of the flames within minutes, except for one fire that took longer to manage.

Some 6,000 dunams (1482.6 acres) of agricultural produce as well as thousands of dunams of open fields were burned due to about 678 fires caused by incendiary kites and balloons flown from inside the Gaza Strip.

Large numbers of Israeli forces were deployed across the Gaza border, aiming to prevent the fires from spreading by early detection of the incendiary kites and balloons.

The website added that Israeli forces found a high-tech solution, with which they would be able to prevent fires, in the form of detection and interception drones. However, according to Ma’an, more fires broke out and are becoming a bigger threat to Israel.

Israeli Prime Minister Benjamin Netanyahu announced that Israel will be closing the Gaza Strip’s main commercial crossing and limiting the fishing zone, in response to the protests in form of incendiary balloons across the borders.

Hamas movement slammed Netanyahu’s decision by describing it as a crime against humanity. Hamas added that Israel’s actions contradict humanitarian and international law.

After Netanyahu’s decision to increase the siege on Gaza, the “incendiary kites unit” of return camps in the central Gaza Strip threatened, on Tuesday, to escalate the number of incendiary kites and explosive balloons targeting Israeli fields surrounding Gaza.