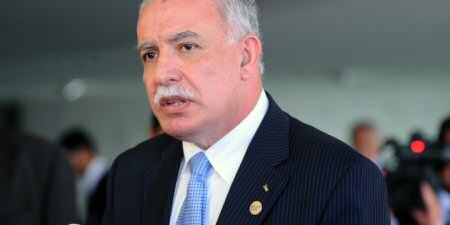 Foreign and Expatriates Minister Riyad Malki said that the United Nations General Assembly will meet today, to vote on a draft resolution regarding the right of the Palestinian people to self-determination, stressing that work is underway to get a vote by the largest number of countries that will constitute a strong response to the US use of the veto power on the draft Arab resolution on Jerusalem.

He told the official Voice of Palestine radio station, on Tuesday, that the General Assembly will be asked to hold an extraordinary session, under the term “United for Peace”, to transfer the powers of the Security Council to the General Assembly to vote on the same draft resolution for adoption.

Maliki pointed out that these moves, in the General Assembly, are among a series of Palestinian steps which will be initiated at the level of the Security Council, the Human Rights Council, UNESCO and the International Criminal Court (ICC).

The minister said that the next step, in terms of international moves in the Security Council, is to activate the application of Palestine to become full member of the United Nations.

With regard to the Russian position on the readiness of Moscow to play an active role in the political process, Maliki stressed the desire of Russia to play the role of mediator, noting that the focus will be, in the coming meetings between Palestinian and Russian leaders, on discussing whether Moscow will act individually or collectively with other international bodies.

On his visit to France, Malki stressed the importance of this visit at the moment because French President Emmanuel Macaron plays an active role in the European Union, adding that the visit to Paris will discuss obtaining a strong position from the European Union against the American decision on Jerusalem and how to defeat this decision, as well as what other steps the European Union should take to create a new international terms of reference to the peace process that will replace the American role.

The foreign minister said that President Abbas will urge France to recognize the state of Palestine, especially since the political conditions and atmosphere are conducive to this recognition, which will pave the way for France to lead moves towards creating an international terms of reference or to play an active role within a number of countries through these terms.

Malki said important meetings will be held in Brussels and Paris, in the near future, by an Arab committee chaired by Jordan, which was formed by the recent ministerial meeting in Cairo, to discuss the recognition of the Palestinian state by the European states and the US decision on Jerusalem.