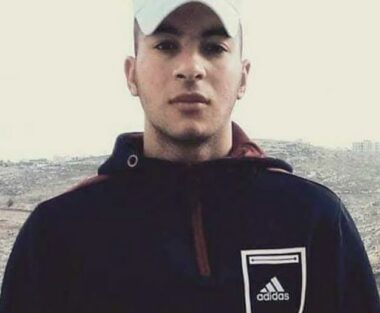 The Palestinian Detainees and Ex-Detainees Committee has reported that a young Palestinian man who was only released from Israeli detention camps a few months ago, had died, on Monday evening, from cancer that went untreated while he was held captive.

The Committee stated that Mohammad Eyada Salahuddin, 20, from Hizma town, east of the occupied Palestinian capital Jerusalem, has died from cancer, and added that he was diagnosed while in Israeli prisons, but the occupation authorities failed to provide him with the necessary specialized medical treatment.

It added that Israel released the young man only a few months ago, after it became clear that his condition was profoundly serious when cancer spread to several parts of his body.

The Committee also said that it fought for his release by filing many appeals with Israeli courts, before the detainee’s condition witnessed a serious deterioration, and held Israel responsible for his death.

Qadri Abu Bakr, the head of the Detainees Committee, said Israel deliberately and callously denied the urgently needed specialized medical treatment to the detainee and added that Mohammad’s death was nothing short of a premeditated crime.

On its part, the Palestinian Prisoners’ Society (PPS) issued a statement mourning the detainee and stating that he is among a long list of detainees who because seriously ill in Israeli prisons and died shortly after their release, due to Israel’s deliberate medical neglect policies against the Palestinian political prisoners.

He added that many detainees have recently been diagnosed with cancer, and are denied specialized medical attention.

It is worth mentioning that Salahuddin was taken prisoner in April of 2019, and was sentenced to two years in prison. In July of 2020, he was officially diagnosed with cancer while in prison.

There are at least 700 detainees in Israeli prisons who suffer from various health conditions, including 270 who have serious illnesses, such and liver and kidney diseases, and twelve who have cancer.

Former political prisoner and the head of the Documentation Department of the Palestinian Detainees’ Committee, Abdul-Nasser Ferwana, told the IMEMC that the death of Mohammad under these conditions is not the first, as Israel has a longstanding policy of depriving the detainees of the basic medical treatment, they need.

He added that Israel keeps committing these crimes and getting away with them, due to the absence of accountability in international courts, and called for shedding closer attention to dire and inhumane conditions the Palestinian detainees face in Israeli prisoners.

Ferwana also said that there is a significant rise of cancer cases among the Palestinian detainees in Israeli prisons, and described what Israel is doing as organized medical crimes against them.

He called for ensuring professional and comprehensive medical checkups on all former prisoners immediately after they are freed, especially since many start showing symptoms after their release.