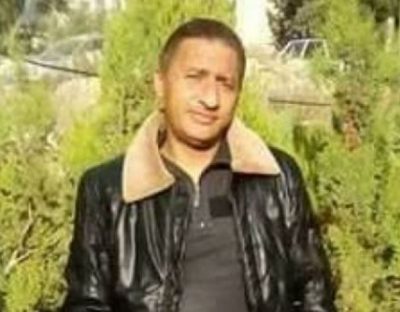 A former Palestinian political prisoner who joined the supporters of hunger-striking detainees at a solidarity tent died on Tuesday of a heart attack, just five months after his release from prison. While in Israeli detention, he was subjected to medical neglect, leading to a severe deterioration of his health, including kidney failure.

The head of the Detainees Committee, Issa Qaraqe, stated that the former prisoner, Mazin Mohammad al-Maghraby, 45, was only released a few months ago, following serious health complications.

al-Maghraby had been participating in a solidarity hunger strike for the past several days, at a protest tent in Ramallah.

Qaraqe said that al-Maghraby suffered from a heart attack, and was rushed to the Ramallah General Hospital, where he was pronounced dead around dawn.

The deceased was from ‘Abwein village, north of Ramallah in the central part of the Occupied West Bank.

In addition to suffering kidney failure, al-Maghraby suffered from a number of other health conditions that were left untreated, and severely deteriorated during his five years of imprisonment.

He had been forced to undergo kidney dialysis since his release from prison, and was hospitalized a number of times.

The protest tent where he suffered a heart attack was established to maintain a constant presence in solidarity with the hundreds of hunger striking Palestinian prisoners. There are more than 1500 Palestinians currently on hunger strike, and the number is increasing daily.

This hunger strike began over a week ago following a call by imprisoned Palestinian leader Marwan Barghouti and others, and has united all Palestinian political parties and factions.

The prisoners are calling for a number of demands to be met, including medical treatment for prisoners, allowing visits from their families and ending so-called ‘administrative detention, in which Palestinians are held without charges for extended periods of months and years.