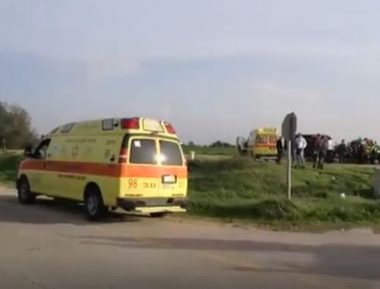 The Israeli army has reported that four of its soldiers were injured, including two who suffered serious wounds, Saturday, after an explosive device detonated near them, close to the border fence in the southern part of the besieged Gaza Strip.

The army said that two of the wounded soldiers suffered serious injuries, and two were moderately wounded, when the explosive device detonated near them. They were airlifted to Soroka University Medical Center.

It claimed that soldiers from the “Golani Brigade, and the Engineering Corps, noticed a Palestinian flag in the area, an approached it before an explosive device exploded near them.”

Israeli daily Haaretz said the army believes that the Popular Resistance Committees is behind the incident, after allegedly “hanging a Palestinian flag during a protest, Friday, to draw the attention of the soldiers who would later invade the border area to remove it.”

The Israeli army said that it also located two tunnels that extend from the border area into Israeli territory, near the explosion area.

Israeli Army Spokesperson Brigadier General Ronen Manelis described the explosion as very serious and said that it undermines what he called “stability in the region.”

Following the explosion, the Israeli army fired a shell at an observation post, run by al-Quds Brigades, the armed wing of the Islamic Jihad, near the eastern border of Abasan al-Jadeeda town, east of Khan Younis.