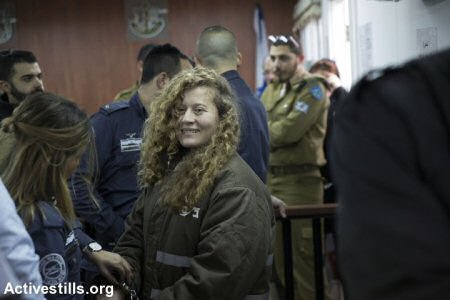 French academics and writers published a collective letter in Le Monde on 23 January, focusing on the case of Ahed Tamimi and the plight of the approximately 360 Palestinian child prisoners in Israeli prisons. The letter also highlights the case of Salah Hamouri, the French-Palestinian lawyer jailed without charge or trial under administrative detention. Public officials and municipalities across the country have adopted declarations demanding Hamouri’s release and even the French government has acceded to the popular call to demand his freedom.

The statement follows below:

We call for the support and intervention of the President to stop the detention of Palestinian children in Israeli prisons. We especially wish to draw attention to the case of Ahed Tamimi, pursued by the Israeli government. Last 15 December, Mohammed Tamimi, 15, was hit in the head by a rubber-coated metal bullet fired at close range by soldiers of the Israeli occupation army. The boy was in critical condition and his cousin Ahed Tamimi, age 16, was visibly upset by the announcement of his condition and the severity of his injuries.

This same unit of soldiers approached the family home an hour later, and Ahed screamed at them and slapped a soldier. This time, the encounter was filmed by her mother and posted on social media, and it shows the courage of an unarmed teenager confronting two heavily armed soldiers.

On 19 December 2017, Ahed Tamimi was abducted from her home in the night by the army and brought before a military court. The twelve counts of indictment brought against her could carry a sentence of 12 years in prison. Israeli military courts deal exclusively with Palestinian prisoners, with a conviction rate of 99.74 percent. Thus, the future of Ahed Tamimi appears dark without intervention.

We call on the President to provide urgent support for the immediate release of Ahed Tamimi and the dismissal of all charges against her. However, Ahed Tamimi’s case is not isolated. According to Defense for Children International – Palestine, Israel brings 500 to 700 Palestinian children before military courts each year, some as young as 12. It imprisons an average of 200 children in any given period.

According to the reports of international agencies, including UNICEF, Human Rights Watch, B’Tselem, Amnesty International and Defense for Children International – Palestine, three out of every four children arrested experience violence during arrest or interrogation. They are frequently arrested in night raids on their home; 85 percent of arrested Palestinian children were blindfolded and 95 percent were handcuffed.

They are deprived of access to lawyers, denied the presence of their parents during interrogation and forced to sign confessions. They are also subject to “administrative detention,” imprisonment without charge or trial. They are often detained in detention centers located outside the territories occupied by Israel, making visits from their families difficult. The use of isolation cells for the interrogation of children is a practice that has been likened to torture under international law.

The UNICEF report of 2013, “Children in Israeli military detention,” concludes: “The abuse of children in contact with the military detention system appears to be widespread, systemic and institutionalized throughout the process, from the time of arrest through the prosecution of the child, their potential conviction and the application of a penalty.”

We urge President Emmanuel Macron to take action urgently to contact the Israeli authorities to finally end their detention practices that violate children’s rights, human rights and international law. We also remind him that, to date, our compatriot Salah Hamouri also remains in Israeli jails, a victim of the same unfair framework of “administrative detention.” France must ask so that Ahed Tamimi and other Palestinian child prisoners come home as soon as possible. We cannot look away while children and one of our compatriots are illegally detained far from their families.