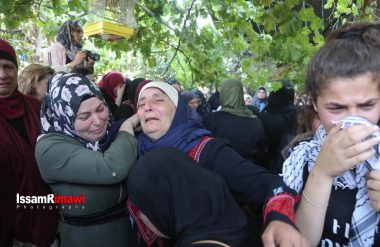 Hundreds of Palestinians participated, on Wednesday evening, in the funeral ceremony of Ezzeddin Abdul-Hafith Tamimi, 21, who was assassinated earlier by Israeli soldiers in Nabi Saleh village, north of the central West Bank city of Ramallah. The soldiers also shot one Palestinian following the burial.

Ezzeddin Tamimi was shot from a very close range, when the soldiers who were less than two meters away from him, logged three bullets in his body, and left him to bleed to death near his home, for more than one hour.

The soldiers prevented medics and residents from approaching the young man, took his corpse away and later in the day, handed his body to the Palestinian side at the Atara military roadblock, north of Ramallah, after closing the entire area.

After receiving his corpse, the Palestinians marched carrying him on their shoulders, and headed to his home, before taking him to the local mosque.

He was then carried in a massive procession to the local graveyard, where he was buried, while the Palestinians chanted demanding retaliation to escalating Israeli crimes and calling on the Palestinian Authority (P.A.) to end all forms of security coordination with the occupation.

In addition, the soldiers attacked dozens of Palestinian protesters, following the funeral ceremony of the slain man, and shot a young man with a rubber-coated steel bullet in his head, causing a moderate injury.

In related news, the soldiers shot a young man with a live round, near Malka Junction, southeast of Gaza city, after some Palestinians managed to cut sections of the border fence.

On its part, the Palestinian government in the West Bank called on the international community to ensure the implementation of International Law, and all related United Nations and Security Council resolutions.

It said that only ending the illegal occupation of Palestine, and the liberation of its people, can bring peace and stability to the region.

The government added that the murder of Tamimi is another crime added to a long black list of Israeli crimes and violations, and only comes one day after Israeli Prime Minister, Benjamin Netanyahu, described during his visit to Paris, the Palestinian protesters as terrorists.

“Netanyahu is justifying the cold-blooded murder of Palestinian medic, Razan Najjar, in Gaza, and the murder of women and children, during nonviolent protests in the coastal region,” the statement reads, “Encouraged by the United States, especially its President Donald Trump, and the silence of the International Community, Israel feels protected to continue its crimes against our people with complete impunity.”