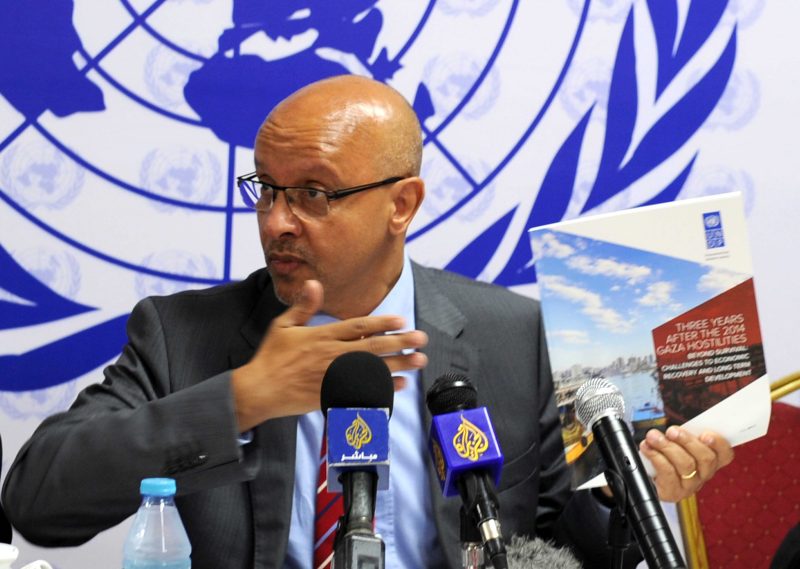 Gaza Economy – Nearing Total Collapse: Living conditions in Gaza have deteriorated to a breaking point, rendering the Gaza population among the most impoverished, left alone and exposed to vulnerabilities globally.

Gaza’s private sector, the engine of future economic growth potential, is presently incapacitated due to the blockade, restrictions on movement and access to natural resources and markets, and recurrent destructive wars, according to the latest Gaza economic recovery report released today by UNDP’s Programme of Assistance to the Palestinian People in Gaza, and authored by Dr Mohammed Samhouri.

The report “Three Years After the 2014 Gaza Hostilities – Beyond Survival: Challenges to Economic Recovery and Long-Term Development” provides an analysis of the main challenges that are currently dominating Gaza’s business environment, three years after the 2014 hostilities, and proposes a fresh approach to support Gaza’s private sector to thrive, not just to survive.

Speaking at the launch, Roberto Valent, UNDP Special Representative of the Administrator pointed out that Gaza must not be seen as a humanitarian burden, but as a development potential driven by its resilient and innovative people.  “Unemployment in Gaza is one of the highest in the world, with 60% of youth jobless. The report is crystal clear that unless political solutions are brought about to the Gaza decade long economic and livelihood deterioration, any support the international community provides will fall short of any expectations and be a simple and unsustainable Band-Aid. The human cost is being borne by the business owners, workers, the women and children, by people who are already traumatized by conflict. They are the ones who will not have access to electricity, water, health services and sanitation,” he added.

Three years after the 2014 Gaza hostilities, and despite reported progress in housing and infrastructure repairs, the construction and recovery process is proceeding slower than planned due to access restrictions and lack of funding. Gaza’s private sector is yet to recover from the widespread damage and losses – estimated at USD 3.1 billion – sustained from the latest devastating hostilities. Much of the destroyed economic facilities in the agricultural and manufacturing sectors are still standing idle, awaiting repair and rehabilitation.

The report also highlights that Gaza’s economy has been virtually stagnant for the past ten years, with average annual real GDP growth rate over the decade not exceeding 1.44%, while Gaza’s population grew by 38.4% over the same period. According to the report, more GDP growth will be required in order to reduce Gaza’s chronic unemployment, currently standing at 40.6%, and improve livelihoods.

Overcoming the challenges highlighted in the report is reliant on resolving the political bottlenecks; that stand as the root cause of Gaza’s crisis. The acceleration of the recovery and reconstruction process will provide Gaza’s population the opportunity to invest in their own lives and the long-term sustainable development of their community.

The current catastrophic conditions in the Gaza Strip desperately require sustained action in order to slow, stop, and eventually reverse the decline in real-terms of Gaza’s economy. The UN already predicted Gaza will be unliveable by 2020.

Further information about the Report “Three Years After the 2014 Gaza Hostilities – Beyond Survival: Challenges to Economic Recovery and Long-Term Development” can be found at www.ps.undp.org.

Via the Palestinian Centre for Human Rights (PCHR).