PA to UN: “Gaza is Not a Humanitarian Problem, it is a Political Problem.” 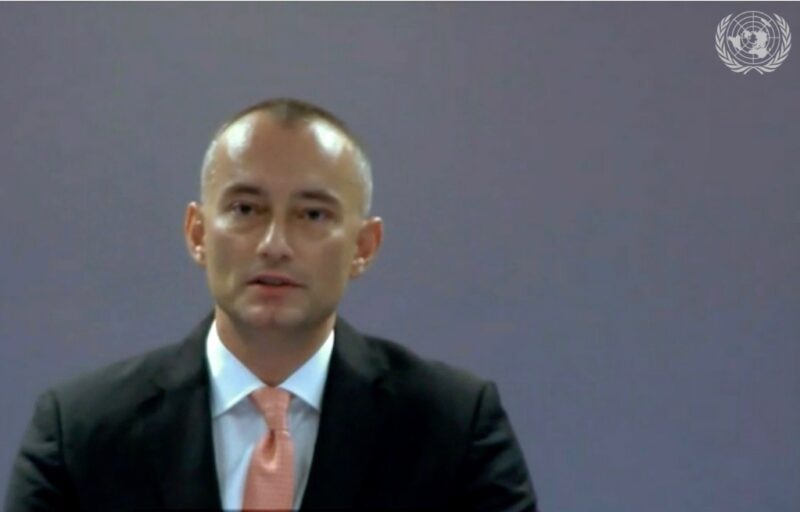 The following is a summary of the opening comments of the United Nations Security Council Meeting #8375 on October 18, 2018,  Mr. Nickolay Mladenov, the representative of the Secretary-General to the Palestinian Liberation Organization and the Palestinian Authority, made the following points (summarized below).

Demolitions
OCHA (United Nations Office for the Coordination of Humanitarian Efforts) reports 39 Palestinian structures demolished since the last meeting, and in addition to that, there are 13,000 demolition orders pending in area C of the West Bank, Occupied Palestine.

Khan al-Ahmar
The Arab League, the UK, the UAE, Italy, France, Germany, Spain, and the United Nations Humanitarian Co-ordinator all urge Israel not to demolish the village of Khan al-Ahmar, (side note : the demolition of Khan al-Ahmar has been postponed until further notice, as of Oct. 20, 2018.

New Settlements
With regards to Israel’s allocation of funds for the construction of 31 new settlement units in Hebron, Mr. Mladenov reiterated ;
“the long-standing United Nations position that all settlement activities are illegal under international law, and an obstacle to peace”

Reduction in Fishing Zone
The fishing restrictions were increased two times in the last month, from nine nautical miles, then to six, then to three after the last rocket attack. Also after the rocket, all crossings between Israel and Gaza were closed.

Gaza
The Great Return March protests have been expanded to include night protests. Hamas and other resistance groups are allegedly sending incendiary kites causing fires in Israel.

On Oct 12 in Gaza, seven Palestinians were killed and one hundred and fifty injured at the weekly peaceful protest. 2 rockets were fired from Gaza, Israel responded with a series of airstrikes.

The Gazan economy was described by the World Bank as being “in free fall”, with the unemployment rate at 53%, and 70% for the youth. In addition to this, 50% of the population lives below the poverty line.

Mladenov warned of the dire situation in Gaza, and urged the council to act :

“The situation in Gaza is imploding. This is not hyperbole, it is not alarmism, it is reality.”

“Since the beginning of this process, the UN has firmly held that we need to make every effort to return Gaza to the control of the legitimate Palestinian government, but, let me assure this council, that barring substantial steps to reverse the current course, this precarious sense of calm is doomed to give way to the mounting pressure, It is already beginning to fray.”

“I’m afraid, that there is no more time for words, now is the time for action, and we must see very clear actions on all sides to de-escalate the situation, otherwise the consequences will be terrible for everyone.”

UNRWA ( United Nations Relief and Works Agency)
Some member states contributed a total of $122 million, in a “very impressive collective international effort, that has prevented an immediate shut down of key UNRWA services.”

“a liaison committee agreed on an urgent set of humanitarian project in Gaza – aimed at addressing the immediate needs of the population of Gaza : these include energy, water, sanitation, healthcare and economic conditions.” “The goals are concrete, they are realistic, and they are achievable.”

He thanks the government of Qatar for their provision of $60 million worth fuel to run Gaza’s electricity.

He implored members of both sides :

“Madame president I appeal to you, I appeal to all council members, and to all friends of Israel and friends of Palestine, to join the United Nations in calling on all sides to step back from the brink. All parties must maintain their continued commitment to the 2014 cease-fire arrangements.”

“Hamas and other militant groups must immediately and effectively stop all provocations and attacks, including rockets and mortars, IED‘s, attempts to breach the fence, incendiary balloons and kites, tunnel construction, and rein in all of the violence at the border. Israel must restore the delivery of critical supplies to Gaza, and improve the movement and access for goods and people. Israeli Security Forces must exercise maximum restraint in the use of live ammunition.”

“The Palestinian Authority (PA) must not disengage from Gaza and must continue it’s engagement with the international community to help alleviate the suffering of it’s people in Gaza.” “Any effort by any party to block the provision critical assistance, designed to relieve humanitarian suffering must not be tolerated.”

“We must never forget, that at its heart, Gaza is not a humanitarian problem, it is a political problem.”

“Humanitarian efforts are taking place in coordination with, and in support of Egyptian efforts to bring Gaza back to the full control of the legitimate Palestinian government.”

“The government’s return to Gaza, and the lifting of the suffocating movement and access restrictions, are necessary for addressing the humanitarian, the economic needs of the population, in a sustainable manner, but also addressing the very important political challenges ahead. “

“In addition to the unification of all Palestinians under one single legitimate Palestinian National Authority, the bigger picture must also be addressed, an end to the occupation, and the realization of the two state solution, based on relevant United Nations resolutions.”

“Madame President, in closing let me reiterate that we must break out of the endless cycle of emergency responses and stopgap measures. The Palestinian people, whether they live in the West Bank including East Jerusalem, whether they live in Gaza, or as refugees in the region, deserve a sustainable and just solution, just as the people of Israel deserve peace and security.”