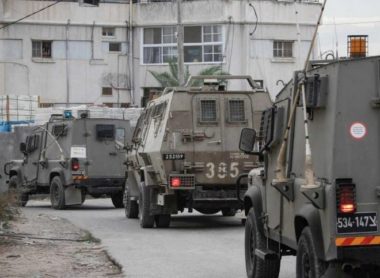 Media sources in Tulkarem, said the soldiers surrounded the under-construction school, once again, and closed the entire area, while dozens of soldiers have been deployed to prevent the Palestinians from entering or leaving it.

They added that the army also invaded many areas in Tulkarem, and used loud speakers demanding Ashraf Na’alwa, to surrender and turn himself in to the army.

The soldiers also brought two armored military bulldozers to the school area, and continued to surround and isolate Shweika, in Tulkarem.

The army has been trying to arrest Ashraf Na’alwa, since he carried out the fatal shooting in Barkan illegal colony, in the West Bank, leading to the death of Kim Levengrond Yehezkel, 28, from Rosh HaAyin, and Ziv Hagbi, 35, from Rishon LeZion.

The soldiers have been carrying out ongoing violent invasions and searches of his home, and homes of his relatives, and abducted many members of his family, including his father, mother, sisters and brothers, and issued a demolition order targeting his parent’s home.