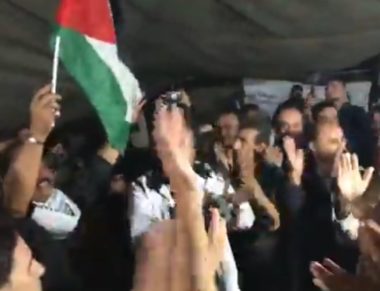 Israeli daily Haaretz has reported that the Israeli government has decided to postpone the demolition of the al-Khan al-Ahmar Palestinian Bedouin community, east of occupied Jerusalem, until further notice. Palestinian Minister Walid Assaf says protests will continue until Israel completely cancels and voids its demolition orders of the village.

Haaretz said that, according to a source at the office of Israeli Prime Minister, Benjamin Netanyahu, the government has decided to “postpone the demolition until further notice.”

It added that the sources said that the “government wants to look into different offers” before the forceful removal of the villagers and the demolition of their village.

Haaretz also said that the military and the “Civil Administration office,” in the occupied West Bank have not received any orders in this regard, and the military has not been instructed to leave the area.

It is worth mentioning that the army continued bulldozing and creating pathways to allow heavy bulldozers and equipment into the Bedouin community in preparation for demolishing it.

In a press conference in al-Khan al-Ahmar, during which he was informed by the media about the sudden Israeli decision, Palestinian Minister, the head of the National Committee against the Annexation Wall and Colonies, Waleed Assaf, said initially that Palestinians do not trust reports coming from Israeli media outlets, unless they receive official confirmation.

Upon receiving confirmation, celebrations broke out in the village, and the villagers and their supporters began chanting, singing and waving Palestinian flags.

“Our protests will continue in al-Khan al-Ahmar, and even if the demolition is delayed, the struggle will not be over,” Assaf stated, “We believe that the Israeli political leadership is just trying to gain time in order to discuss solutions before the forceful eviction and demolition of the village.”

He also stated that, just a month ago, the Israeli High Court, denied appeals against the demolition, and granted a green light for the destruction of the village.

“Our goal is to prevent the demolition of the village, and not to postpone it. The struggle continues, and the current developments are the direct outcome of ongoing protests, and solidarity with the just cause of the villagers, who refuse to be relocated or uprooted.”

“Our ongoing popular nonviolent protests for the fifth consecutive month managed to achieve significant progress, including the statement of the International Criminal Court, and the Security Council, in addition to statements by various groups, such as Amnesty international.”

He also stated that the protests will not stop, and the locals along with Israeli and international peace activists are preparing the winter phase of the demonstrations.

“We will not stop; we will continue our nonviolent protests and solidarity activities with al-Khan al-Ahmar, and our protests will even expand to all parts of occupied Palestine, not just in al-Khan al-Ahmar, starting tomorrow, Sunday. Unless we receive serious guarantees that the village will not be demolished, the protests will continue and escalate. We are not talking about postponing the demolitions. We want the destruction order to be canceled.”

“The demolition of al-Khan al-Ahmar harms the Palestinian national goals of establishing an independent and continuous Palestinian state, with Jerusalem as its capital,” he added, “The demolition of the village means the beginning of ethnic cleansing in Area C of the occupied West Bank. We are here nonviolently protesting; we have no gun and no weapons and will continue our peaceful protests despite the military use of violence, including gas bombs, and taser guns. We have been documenting all the Israeli violations, and will sue all of those officers, soldiers and those who gave them orders, in international courts, and will expose the Israeli crimes and violations against our people.”

“I also salute the villagers here who refused the elective displacement and relocation, and I want to salute and thank every Israeli and international peace activist who stood in solidarity with us despite the Israeli military threats and violence, and I want to salute those who were detained and imprisoned by Israel for their solidarity with us, especially Tha’er Thawabta who was abducted by the soldiers just a day ago, and governor Adnan Gheith who spent 123 consecutive days with us here until he was taken prisoner by the soldiers. I want to thank you all for being here, thank the media and the journalists who literally have been living here in this community, to document all activities.”