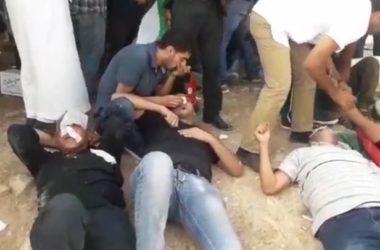 Israeli soldiers resorted, Friday, to the excessive use of force against dozens of Palestinian, international and Israeli peace activists, holding a nonviolent procession in the al-Khan al-Ahmar Palestinian Bedouin community, east of occupied Jerusalem, wounding ten, and abducted one after injuring him.

Medical sources said the soldiers physically assaulted the nonviolent protesters, in addition to spraying with gas and pepper-spray.

They added that the attack led to at least ten injuries, including five who were rushed to Palestinian hospitals after suffering burns, cuts and bruises, in addition to the severe effects of teargas inhalation.

Furthermore, the soldiers assaulted and injured a Palestinian, identified as Tha’er Shawabka, before abducting him.

Palestinian Legislator and the Secretary General of the Palestinian National Initiative, Dr. Mustafa Barghouthi, said the escalating Israeli attacks against the nonviolent protesters will only boost the steadfastness and determination of the residents and activists.

“The Israeli occupation army is brutally assaulting nonviolent protesters, medics and journalists,” Dr. Barghouthi said, “The army installed roadblocks, surrounded the entire area, and tried to prevent us from reaching al-Khan al-Ahmar, but the protesters, locals, Israeli and internationals managed to reach through the surrounding hills and mountains.”

He described the excessive use of force by the army as “vicious and criminal,” and added that the “popular resistance will continue in al-Khan al-Ahmar, and will prove the unity between occupied Jerusalem, the ongoing Great Return March processions in Gaza, and the struggle from breaking the deadly Israeli siege.”

The entire village is set to be razed to the ground by military forces under the ‘E1 Jerusalem Plan’ meant to encircle the eastern part of Jerusalem with Israeli colonial settlements in order to encircle Jerusalem and claim it for Israel, denying the Palestinian people’s historical and ongoing claim to the city. Al-Khan al-Ahmar village is made up of around 180 members of the Jahalin Bedouin tribe, which has a 70-year-long history of dispossession and forced relocation by the Israeli government.

Before Israel’s establishment, the Jahalin lived in the area of Tel Arad in the Negev, located in present-day Israel. Following the 1948 war, the Israeli military forced them out of their villages and into the West Bank; they settled in the pink, rocky hills of what today is known as Mishor Adumim in the early 1970s. Most of the villagers live in makeshift tin shacks or tents, and make their living off grazing. Read More on +972mag