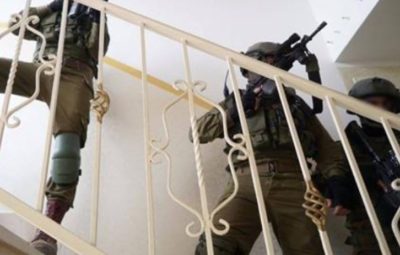 Israeli soldiers abducted, on Tuesday at dawn, the mother and two sisters of Ashraf Na’alwa, the Palestinian who fatally shot two Israeli settlers, and wounded a third, in the Industrial Zone of Barkan colony, which was illegally built on Palestinian lands in Salfit governorate, in the West Bank. The army also decided to demolish the Na’alwa family home.

Dozens of soldiers invaded Shweika area, north of Tulkarem in northern West Bank, searched and ransacked many homes and abducted Wafa’ Mahmoud Na’alwa, 54, and her daughter and mother of two children, Hanadi Waleed Na’alwa, in addition to her other daughter and college student, Sondos Na’alwa, 20.

The soldiers also abducted a university student, identified as ‘Aahed Mohammad Jaber, from his home in Beit Lid town, east of Tulkarem.

On Monday, the soldiers abducted Ashraf’s sister, Fairouz, but released her on the same day.

It is worth mentioning that dozens of soldiers surrounded and invaded Shweika area, all through the night until morning hours, Tuesday, and invaded Ashraf’s family home several times, in addition to interrogating his family, in an attempt to locate him as he remains on the run since the shooting.

Furthermore, the Israeli army corps of engineers took measurements of the Na’alwa family home, in preparation for demolishing it, as an act of collective punishment against the family.

The soldiers also abducted one of Ashraf’s coworkers in the Industrial Zone, who worked with him in the same factory before he was fired, reportedly for knowing about his intentions to carry the shooting out, and “holding his last will.”

It is worth mentioning that Ashraf used to work at the Industrial Area until he was fired several months ago.