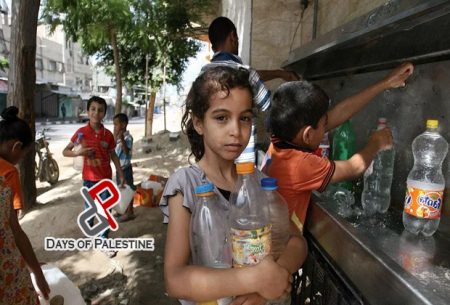 The Palestinian Water Authority has warned of the dangerous situation regarding fresh water in the Gaza Strip, due to increasing salinity and decline of aquifer levels.

“Gaza suffers from a sharp decline in the quality and quantity of fresh water,” he said.

The groundwater wells have witnessed a sharp decline in the water level which, in some areas, reached up to 15 metres below sea level.

Al-Shanti stressed that Gaza’s population mainly depends on groundwater as a source of fresh water, noting that this natural reservoir was affected by the increasing urban sprawl.

Groundwater wells decline due to the Israeli theft of deep underground water via hundreds of wells surrounding the Gaza Strip.

Based on an earlier UN report, Quds Press said that the Gaza Strip is expected to have no fresh water valid for human use by 2020 due the increasing salinity, pollution and the continuing effects of the Israeli siege.

Archive IMEMCpost — 09/03/15 United Nations: Gaza Could Be Uninhabitable Within 5 Years