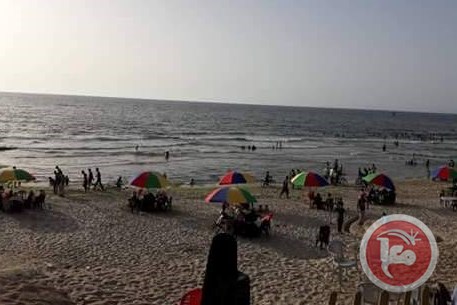 As an electricity crisis continues to afflict the Gaza Strip, Muslim residents of the besieged coastal enclave are breaking their fasts on the beach, as the holy month of Ramadan enters its second week.

“Without any previous plans and preparations, my wife suggested that we take our homemade food and go to the beach because of power cut during Iftar time,” said Muhammad Salim from al-Shati refugee camp in the northern Gaza Strip.

Like several other families, Salim and his five family members set out for the beach in Sheikh Ijlein south of Gaza City, in an effort to escape the extreme heat and poor lighting indoors.Similarly, Islam Salim from Gaza City told Ma’an News Agency that “without electricity at home, it’s very difficult during Ramadan,” where residents in Gaza are abstaining from food and drink for up to 16 hours.

If it weren’t for transportation difficulties, Salim expressed, his family would break their fasts at the beach every day. He added that one of the reasons some families prefer to eat “Iftar”, the sunset meal during Ramadan, by the beach, is the intolerable heat in their houses due to power cuts.“

Sometimes we have serious difficulties sleeping, so we stay at the beach until late into the night,” said Salim.

The densely populated Gaza Strip requires an estimated 380 Megawatts of electricity to adequately supply its population of 1.9 million. However, Gaza currently receives only 200 Megawatts from Gaza’s sole power plant, as well as Egyptian and Israeli grids.

Gaza Electricity Company’s public information officer, Tariq Labad, recently announced that power distribution would be slightly improved during Ramadan, after the power supply in Gaza was reduced to 6 hours for every 18 hours earlier in May.

The Gaza Strip was left almost entirely without power during a number of days, in April, due to maintenance work on power lines from both Israel and Egypt, as well as the ongoing tax disputes on fuel for the enclave’s near-defunct power station.

Palestinian officials announced, at the end of April, that the Gaza Strip would be exempt from paying fuel tax this summer, marking a temporary resolution to the tax dispute that has deepened an electricity crisis in the besieged enclave.

The 80 to 100 percent exemption on fuel tax was expected to go into effect May 1, to continue until the end of the summer, intended to guarantee Gaza eight hours of electricity per day from the besieged enclave’s sole power plant.

The power plant — alongside Egyptian and Israeli electricity grids — fail to cover the territory’s energy needs and has suffered from chronic shortages due to the near-decade long Israeli blockade.