GMO: 125 Violations against Palestinian Journalists in May 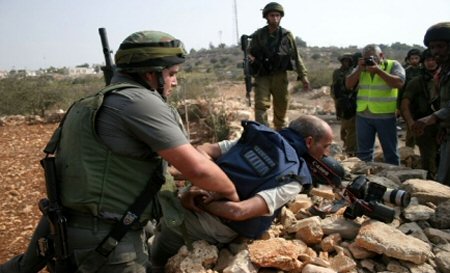 Israeli occupation forces committed 125 violations against Palestinian journalists during the past month of May, a Palestinian government office said, in its monthly report.

The report revealed the  number and the conditions of wounded Palestinian journalists who sustained injuries while covering the Great March of Return, in eastern Gaza, with note to the large variety of injuries as a result of the use of explosive weapons by Israeli occupation forces. These weapons caused long-term disabilities for some journalists, while preventing them from carrying out their duties.

According to Al Ray Palestinian Media Agency, the report recorded 55 injuries in the Gaza Strip and 10 in other occupied Palestinian lands, by Israeli forces, during May.

Eight other journalists sustained injuries by shrapnel from explosive bullets.

17 Palestinian journalists sustained burns, wounds and fractures from poison gas bombs that made direct contact with their bodies, while more than 22 journalists suffocated from exposure to the gas. Additionally, occupation soldiers attacked more than four broadcast cars with poison gas, directly causing damages.

The report also documented one case of threats and incitement against the poet Darin Tator.  Facebook administration, apparently incited by the Israeli occupation, closed the pages and accounts of more than  27  journalists and a media site that included the page of Palestinian Rai News, Palestine Today and Arresalah.