Great March of Return and Breaking the Siege: Worldwide Solidarity This Weekend 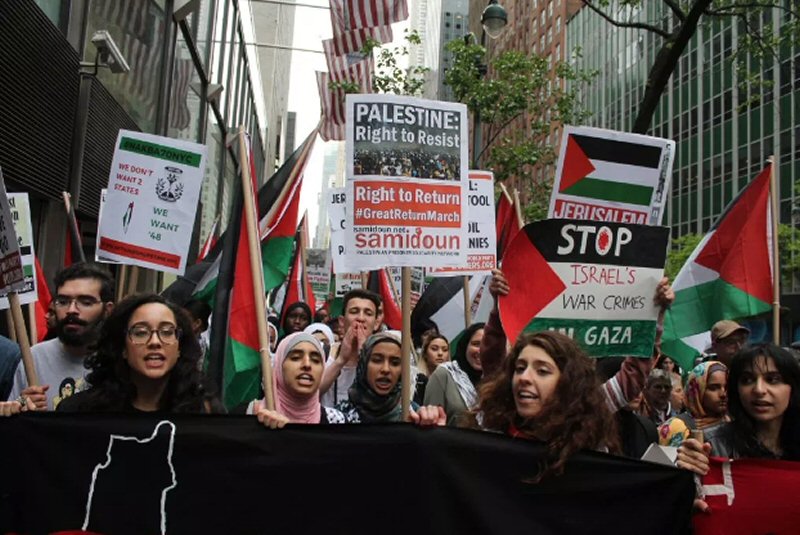 As we approach the one-year anniversary of the Great March of Return and Breaking the Siege in Gaza– also the 43rd anniversary of Land Day – Samidoun Palestinian Prisoner Solidarity Network joins Palestinians and people around the world in encouraging all supporters of justice to join in solidarity actions at this critical time. Land Day has been marked since 1976 not only to highlight Palestinians’ connection to the land and their struggle to liberate it from ongoing colonialism, but also to remember the six Palestinians slain on 30 March of that year in Palestine ’48 as they protested against land theft and confiscation.

Palestinians in Gaza, 70 percent of them refugees denied their right to return home, marked Land Day in 2018 with a massive march, bringing tens of thousands and even more to the colonially-imposed “border” and its associated “fence.” They demanded not only an end to the suffocating siege under which they have suffered for over a decade, progressively intensifying and persisting through three devastating wars. They also brought to the forefront the core of the Palestinian struggle for liberation: the right of Palestinian refugees to return to their homes and lands confiscated by Zionist colonization. It is a struggle that belongs not only to the Palestinians in Gaza, but to all Palestinians around the world, especially those in the refugee camps in Lebanon, Syria, Jordan and those Palestinians dispersed even further from their homeland.

For organizing in a mass, collective demonstration highlighting this most fundamental Palestinian right, these demonstrators have faced brutal repression and killing for nearly one year. Medics, journalists, children, elders and people with disabilities have been shot down in cold blood by Israeli occupation forces as they protested for their right. And despite the killing, they have persisted and remained, marching each Friday to claim their rights in an uprising that has inspired people around the world, and especially Palestinians, with a clear commitment to achieving their goals: return and liberation.

Indeed, the Israeli occupation state has repeatedly attempted to pressure Palestinians into stopping the marches, through continuing and intensified siege, military attack and brutal military might. Despite the impunity Israeli officials enjoy and the unparalleled support they receive from the U.S. government and other world powers, the reality of Israeli war crimes and crimes against humanity has perhaps never been so clear, as was recently affirmed in a new report by an independent commission of the UN Human Rights Council.

In the context of the fragmentation of Palestinians, the Great March of Return, on Land Day, has once again highlighted that the Palestinian struggle is one struggle – from Palestinian citizens of Israel in ’48 Palestine, to those in Jerusalem, in the West Bank, in the Gaza Strip, in Jordan, in the camps in Lebanon and Syria and everywhere around the world in exile and diaspora. To this number must also be added the nearly 6,000 Palestinian prisoners in Israeli jails, who through continued struggle inside the prisons continue to confront the siege and isolation imposed upon them as well.

Palestinians killed by occupation forces in the Great March of Return, have – like those shot down in extrajudicial executions and assassinations in the West Bank – had their bodies imprisoned by the Israeli occupation in an attempt to extort political concessions from Palestinians. In addition, participants from the demonstrations have themselves been kidnapped and imprisoned inside Israeli jails. Palestinian refugees who continue to be denied their right to return to their homes and lands may enter Palestine ’48 only when shackled, bound, tortured and imprisoned by the colonizing power that has confiscated that land.

Every uprising and act of resistance inside Israeli prisons is part of the same struggle against siege and isolation that the Great March of Return and Breaking the Siege represents. The Gaza Strip itself is often described as an “open-air prison,” the siege another form of colonial torture and isolation akin to that imposed on Palestinian prisoners in Israeli jails. The struggle to break the siege is a struggle to break all of the sieges encircling Palestinians, from the ever-intensifying racist campaigns of discrimination and exclusion in Palestine ’48, the ethnic cleansing in Jerusalem, the raids, killings and colonial settlements in the West Bank, the isolation of Palestinian refugees in the camps, the criminalization and repression of Palestinian activism worldwide.

Since 30 March 2018, the Palestinian Ministry of Health confirmed that Israeli occupation forces have killed 266 people, including 50 children, six women and one elderly man. 30,398 people have been injured, 16,027 seriously enough to be hospitalized. The hospitalized Palestinians include 3,175 children and 1,008 women. During the demonstrations, 6,857 Palestinians have been shot with live bullets and another 844 with rubber-coated metal bullets. 1,503 were shot in the head and neck, 7,731 in the legs and 732 in the chest and back; 136 Palestinians have gone through amputations as a result. (This reflects another version of the infamous policy of Israeli commander “Captain Nidal” in shooting and disabling the Palestinian youth in Dheisheh and Aida refugee camps near Bethlehem.)

Despite this great price, Palestinians are continuing to march to break the siege, to win freedom for all, from the prisons to the camps to the streets, fields and shores of Gaza (where fishers and farmers risk death or imprisonment to ply their trade and support their families and communities.) They continue to march, most centrally, for their right to return home, for liberation for Palestine.

This weekend, we urge you to answer the calls for solidarity – to join the marches, events and demonstrations taking place around the world, to echo the calls of Palestinians from inside the prisons of the Israeli occupation and the open-air prison in Gaza for an end to the siege and for the right to return.

A list of events and activities is below. We know this list is not fully comprehensive, and we urge people to send their additional events and actions to us on Facebook or via email at samidoun@samidoun.net. Please join your local events and join in the uprising that Palestinians in Gaza have been leading for the past year – continuing over 100 years of anti-colonial Palestinian resistance.