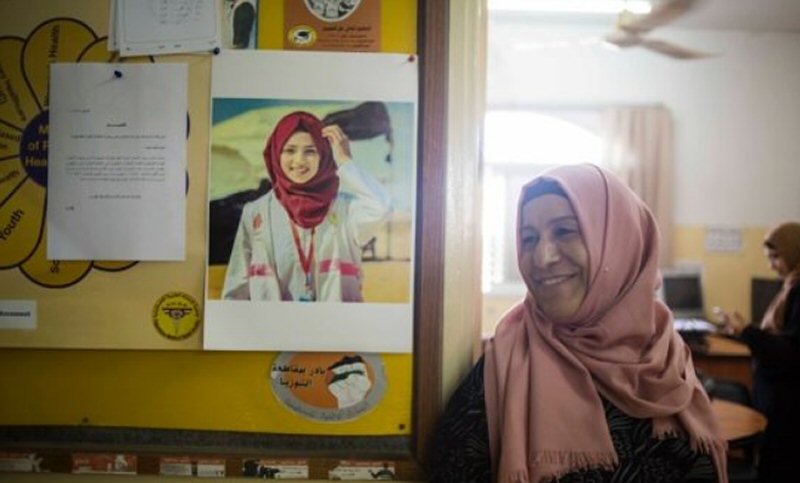 “When the doctor told us about our son’s condition, during the pregnancy, he did not take into account what this means psychologically, for us, as parents. We were in shock and we felt like we have to manage it all by ourselves. But, then, we found Community Based Rehabilitations who support us and make us feel that we have been compensated for many things. For example, they helped us to find a suitable kindergarten for Nour, and they support us psychologically, as if they were relatives or friends.”

“Our program’s approach is to reach people with disabilities in their homes and to serve them through home visits. We work with all kind of disabilities and with different ages, but we focus mostly on the marginalized groups, like women, since they are facing doubled violation as being women with disabilities in a patriarchal society. We are also working with children since there are little public services for this group. In our program, we are working with 13,000 persons and 65% of them are children.”

Samer: “In the early morning, I go out to get groceries and whatever we need at home, and then I come back to take care of Yamen, change his clothes, set up his oxygen, if he needs it, and then take him for a walk around in the neighborhood”

Yaman’s Mother: “Yamen has become everything for him, his life, his job and his friend.”

Yamen’s mother:  “I used to believe that my son is the only one with a disability, but, when we met Fayha, I wanted to see other people with disabilities, and she invited us to all meetings and celebrations, so I tell her anything Yamen needs.”

Deema: “My main job is to monitor human rights violations against people with disabilities. To do so, I coordinate with case workers like Fayha and Fatima. They inform me about specific rights violations and we monitor them. For example when the school in some village refuses to integrate a child with a disability. In that case, we would visit the child’s family to know what kind of problem they have, and then we go to school to understand their reasons. Also, we fill a form about the case and the kind of violation and send it to our legal consultants. They raise it directly with the violator. For example, if there is a problem with a school, we raise it with the ministry of education”.

Through their advocacy, Fatima and her team encouraged the Haddad Hotel to become the first barrier free hotel in the northern West bank. They are working hard to multiply this success and to make more public spaces accessible for people with disabilities.

Fatima: “We are also focusing on the mental disability cases because they do not have enough services. There are no qualified centers for vocational training, and there is only one diagnosis center in all of Palestine… We will continue to work with this rights-based approach to also protect people with mentally disabilities, since there are no safe places for them. Either they are in houses or streets. Also,  we try to protect women with mental disabilities against sexual and domestic violence.”

“We consider disability rights as part of human rights. We also work on the women’s rights and women’s participation in the local elections. We wanted women with disabilities to be members of clubs and local bodies. In addition, we worked on the child rights, and we always focus on the children with disability because they are least lucky in society.”

Human Interest 03/22/19 The Story of Ahmad Manasra: Killed While Trying to Save a Family from Israeli Soldiers