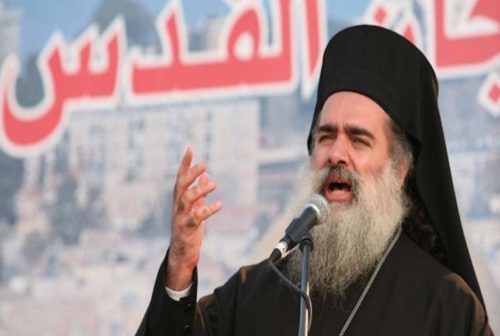 Bishop Atallah Hanna, the archbishop of Sebastian Roman Orthodox, stated Saturday, that the ancient Orthodox real estate in the area of ​​Hebron Gate is under serious threat, and that extremist Jewish settlers may seize these properties at any time.

The archbishop issued the following statements while being hosted by a delegation from the Orthodox parish, from Jerusalem and vicinity.

“We might witness the same scenario of the building of Saint John the Beloved in the Old City, to which the settlers were allowed years ago, again here in Hebron Gate.”

“This is a new and renewed calamity targeting our ancient Orthodox estates in Jerusalem. The seizure of Hebron Gate and its buildings means further weakening, and marginalizing Christian presence in Jerusalem,” he declared.

Bishop Atallah Hanna:“We call on the churches over the world and on the human rights institutions to stand up for the salvation of orthodox real estate in Hebron from the clutches of extremist settlers.”

He added:“We have been addressing appealing letters to the rest of the world over the past months, calling for a move to stop this impending catastrophe threatening us in Hebron, but we have not yet seen any serious action or any initiatives aimed to break this deal, concluded by the unworthy and submitted to the unworthy. ”

Bishop Atallah explained “those allowing these takeovers are betraying the Church and Jerusalem, and are no better than Judas Iscariot, who betrayed his teacher for 30 silver coins. Unfortunately, others betraying their teachers and Christianity for some dollars still exist, and they are becoming tools serving the enemies of Jerusalem, its sanctities and holy, Islamic and Christian endowments.”

“We shall warn again against the danger of the schemes targeting Hebron, for the news reported by media foreshadows the impending disaster. Settlers may storm the ancient Hebron buildings at any time. We may wake up one day to find the settlers in these buildings with the Israeli flag raised on top of them,” he warned.

“We shall reiterate our call to King Abdullah II bin Al-Hussein, the Hashemite custodian of Jerusalem and its Islamic and Christian holy sites, as well as the Palestinian president, Abu Mazen, to work to break this deal and preserve the identity and history of Jerusalem, and the Christian presence in this blessed city. We shall also address all world leaders, Islamic and Christian religious authorities and advocates of justice and human rights around the world, urging them to stop this impending catastrophe threatening Hebron and its ancient Orthodox buildings, the leading gate to the holy sites, monasteries, churches and ancient patriarchates in Jerusalem.”

The Bishop pointed out that “breaking the Hebron deal needs a legal and political effort because this issue is political, being part of the deal of the century and conspiring against Jerusalem, its holy sites and Arab-Palestinian identity. Politicians are quite aware of the moves they should be taking in order to break this deal, in case they are willing to.”