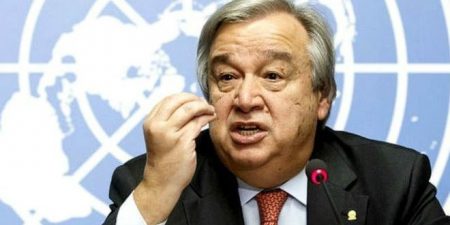 The United Nations Secretary-General, Antonio Guterres, presented four proposals, this Friday, aimed at protecting Palestinians in the occupied West Bank and in the besieged Gaza Strip, including the deployment of observers and increased humanitarian and development assistance.

Guterres presented his proposals in a 14-page report prepared at the request of the United Nations General Assembly, after 171 Palestinians were killed in the Gaza Strip by Israeli forces since March 30th, known as the start of “The Great March of Return.”

The UN General Assembly had requested the report, in a resolution adopted in June with 120 votes in favor, eight against and 45 abstentions, which condemned Israel for excessive force against Palestinians and also denounced the firing of rockets from Gaza into Israel.

According to Ma’an News Agency, the UN had requested proposals to ensure “the safety, protection, and well-being of the Palestinian civilian population under Israeli occupation, including recommendations regarding an international protection mechanism.”

Guterres wrote, in his report “the combination of prolonged military occupation, constant security threats, weak political institutions, and a deadlocked peace process provides for a protection challenge that is highly complex politically, legally and practically.”

Guterres started with the first proposal regarding strengthening the UN field presence and providing it with human rights monitors to assess the situation, in the occupied territories, with “armed UN peacekeepers or armed forces from a group of like-minded states operating under a UN mandate could be deployed to offer physical protection. This option, however, would need a Security Council mandate and the United States, a close ally of Israel, would likely wield its veto.”

Guterres continued to the second proposal about increasing humanitarian and development assistance; he wrote “a UN or non-UN civilian observer mission could be deployed into the occupied territories with a specific mandate to report on protection and well-being issues and provide local mediation. This would also need a UN mandate.”

The third proposal suggested was to form a civilian monitoring mission deployed in sensitive areas such as checkpoints, crossings, and near illegal Israeli settlements, whose task would be to report on protection issues.

Guterres wrote, “could be expanding current UN programs and development and humanitarian aid to address the needs of Palestinian civilians more effectively and strengthen Palestinian institutions.”

The fourth and final proposal was concerning the deployment of a police or military force authorized by the UN, whose mission would be to provide physical protection to Palestinian civilians.

“Could be to send additional UN human rights, coordination and political officers to boost monitoring and reporting on the situation and increase the UN’s visibility,” Guterres wrote.

Guterres concluded “the best way to ensure the safety and protection of the Palestinian civilian population is still the negotiation of a comprehensive, just, and final settlement of the Arab-Israeli conflict.”

Additionally, throughout the report, Guterres stressed that for each of the proposals, cooperation by both Israel and Palestine would be necessary. However, it is unlikely that Israel would agree to any of these proposals.