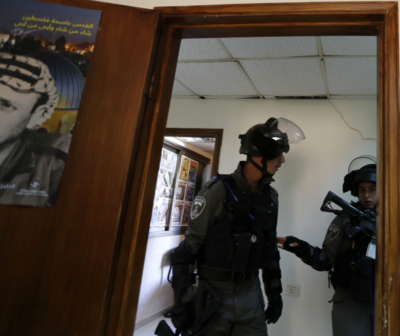 The Israeli raid on WAFA headquarters in the Occupied West Bank city of Ramallah Monday elicited strong condemnation from many people.

Speaking with WAFA editor-in-chief Kholoud Assaf, Prime Minister Hamdallah called the army invasion “part of the war the Israeli occupying army wages against the Palestinian people and media in particular.”

The reason for the invasion, in his opinion, was “an attempt to hide the truth about Israel’s crimes and blatant violations of International Law, International Humanitarian Law, and the Geneva Conventions.”

The Palestinian Cabinet, headed by Prime Minister Hamdallah, met Tuesday in Ramallah. The officials called on the International Federation of Journalists, as well as Arab and international media institutions to condemn “these blatant Israeli crimes”.