Hatari Under Fire for Displaying Palestinian Flag at Eurovision 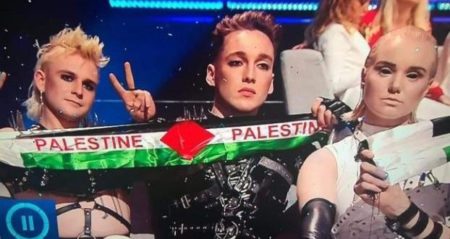 Hatari, the Icelandic Act, could face punishment after they raised the Palestinian flag, while their public vote was being announced at the end of the live final of the Eurovision contest, held in Tel Aviv– amid international calls for boycott.

In a statement, Eurovision said the “consequences of this action” will be discussed by the contest’s executive board.

It said: “In the live broadcast of the Eurovision Song Contest Grand Final, Hatari, the Icelandic act, briefly displayed small Palestinian banners whilst sat in the Green Room.

“The Eurovision Song Contest is a non-political event and this directly contradicts the Contest rules. The banners were quickly removed and the consequences of this action will be discussed by the Reference Group (the Contest’s executive board) after the Contest.”

Eurovision is supposed to be “non-political” however the build-up has been marred by controversy and calls for a boycott by pro-Palestinian activists.

During Madonna’s highly anticipated performance, her backing dancers displayed Israeli and Palestinian flags. According to the PNN, organizers said it had not been part of the approved act.