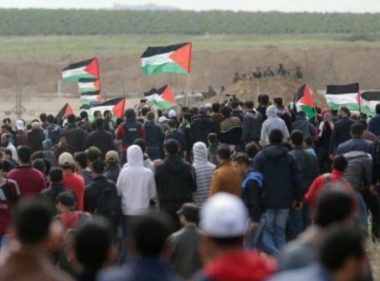 The Palestinian Health Ministry has reported, Wednesday, that the number of Palestinians who were killed by Israeli army fire since the Palestinian Land Day, and the beginning of the “Great March of Return” on March 30th, 2018, has reached 33, while 4297 Palestinians have been injured, including 134 who suffered serious wounds.

The Health Ministry stated that among the slain Palestinians are three children and added that the soldiers shot and injured 1539 with live fire, 388 with rubber-coated steel bullets, 1878 who suffered the effects of teargas inhalation, including 459 who were hospitalized, and 478 who suffered various cuts, bruises and burns.

It added that 134 of the wounded Palestinians suffered life-threatening injuries, 1183 suffered moderate wounds, and 2962 were mildly injured.

196 of the wounded Palestinians were shot in the head or neck, 384 in the upper extremities, 96 in the chest and back, 116 in the abdomen and pelvis, 1496 in the lower extremities in addition to 113 who suffered various wounds in several parts of their bodies.

The Ministry also stated that the soldiers deliberately targeted Palestinian journalists and medics, wounding 44 medics, and causing damage to 19 ambulances.

The army killed one journalist, identified as Yasser Mortaja, 31, who was shot in the abdomen below his “Press” flack jacket, on April 6th, while he was out covering a border protest.

The soldiers also injured 66 Palestinians with live fire, and the severe effects of teargas inhalation.

The Health Ministry also stated that four wounded Palestinians suffered amputations of their arms, and 13 lost lower limbs, due to Israeli army fire.

The Great March of Return protests are planned to continue until May 15th, which marks the Palestinian Nakba (Catastrophe) when the state of Israel was established in the historic land of Palestinians after various massacres against the Palestinians and the complete destruction and displacement of hundreds of villages and towns.

The Palestinians are demanding the implementation of all related United Nations and Security Council resolutions, especially the Right of Return.