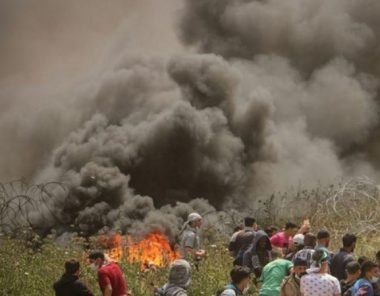 Israeli soldiers injured, Wednesday, several Palestinians in the Gaza Strip, after the army opened fire at the “al-Awdah” (The Return) protest camps, near the border fence in the besieged Gaza Strip.

Medical sources said several Palestinians were shot with live fire along the border area, in the eastern part of the Gaza Strip.

They added that the soldiers also shot two Palestinians with live fire in Khuza’a town east of Khan Younis, in southern Gaza Strip.

In addition, the soldiers shot a Palestinian with a live round in his arm, and another in his leg, after the army opened fire on protesters who dragged sections of the border fence.

Many Palestinians suffered the effects of teargas inhalation after the soldiers attacked protesters east of Gaza, while a young man was shot with a live round in his shoulder.

Furthermore, the soldiers shot a child with a live round, east of the al-Boreij refugee camp, in central Gaza.

In related news, the army fired an artillery shell at an observation post run by the Al-Qassam Brigades, the armed wing of Hamas, east of al-Boreij, after the soldiers claimed shots were fired at a military vehicle driving across the border fence.