‘Onion Boy’ Dreams of Playground, Just Like Every Other Kid 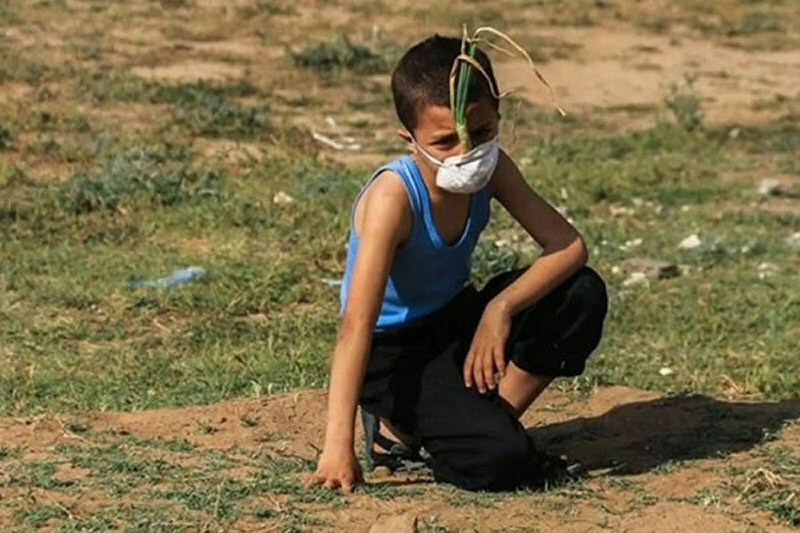 Onion boy is a Palestinian boy who represents most Palestinian children experiencing brutal Israeli violations of rights and freedoms in front of the eyes of the motionless international community.

A picture of a 9-year-old boy in the Gaza Strip went viral immediately after it was posted on social media on March 30. It was shared on the first day of the Gaza Strip’s Great Return March, a six-week protest along the eastern Gaza border fence reiterating right of return of Palestine refugees and calling for an end to the disenfranchisement of the Palestinian people, it has fast become a symbol of the multi-generational spirit of the protest.

The now iconic photo shows Mohammed Ayyash crouched on the ground, as if ready to defend his people at a moment’s notice, wearing a mask with an onion stalk slipped inside to protect against Israel’s teargas bombs.

The mask and the smell of the onion actually work, but they are also evocative symbols of a people forced to counter the advanced weapons of the eighth largest arms exporter in the world with homemade inventions.

Who is this little boy who has become social media and TV sensation at such a young age? He, his two brothers, two sisters and parents live in central Gaza’s Deir Al-Balah. His youngest sister was born just three days after the protest.

“I named her Ahed Tamimi. I wanted her to have Ahed’s distinguished beauty and strong personality,” says Mohammed’s mother, Reham. That seems fitting, since, for Palestinians, Mohammed has become a sign of defiance, just like Ahed Tamimi became a symbol of resistance after she was imprisoned for slapping an Israeli soldier who had intruded onto her family’s property.

When Mohammed’s father, Sa’d Aldeen, asked his son what he would say to the Israeli soldiers if he got close enough, the boy answered in the Hebrew his dad learned in Israeli jail: “Anahno lo mefakhdim memkhem (We are not afraid of you).”

The Ayyash family represents the Gaza population, today, in another important way: They can barely get by. Sa’d supports the family on a disability pension from the government, claimed due to the injury he received to his leg after being shot by Israeli soldiers during the First Intifada. He receives 1,100 shekels (about $314) a month, but must spend 700 just for rent.

When asked how she felt about her youngest son participating in a march that has become so deadly (35 protesters have been killed to date and more than 3,000 injured), Reham says she refused her family members’ attendance at the beginning, fearing she would lose one of them.

But, at the same time, she admits she feels that their participation is a national duty. And, she encourages other mothers to let their children go to the march encampments so they will learn about their history.

As for Mohammed’s father, Sa’d, he believes it’s his duty to teach Mohammed to remember Palestine and demand his rights in a civilized, peaceful way. “In this way, we defy the Israeli thinking that the elderly Palestinians will die and the young will forget.”

And Mohammed?  He simply says he loves his homeland, Palestine, and wants to play a role in fighting for his people’s rights. He wishes his family could someday return to Yafa – the city from which their ancestors were forced to leave. That wish may seem impossible fulfill, but not for Mohammed.

“He is enthusiastic about going to the border every day because he naively thinks the Israeli occupation consists only of the soldiers he sees standing on the sand barriers in front of the border. And that Yafa is just behind those sand barriers,” Reham says sadly. “Thus, he thinks he only needs to shout loudly at the soldiers. For him, it’s as simple as that!”

When asked what he wants in his future, Mohammed says with a wide, bright smile, “I want to have my own playground so I can play football and basketball the whole day. I want it to be named after my new nickname, Abu Basala (the kid with an onion in Arabic).” He thinks a moment and then adds, “I also wish we could have a big, comfortable house with everything I need, including my own I-pad.”