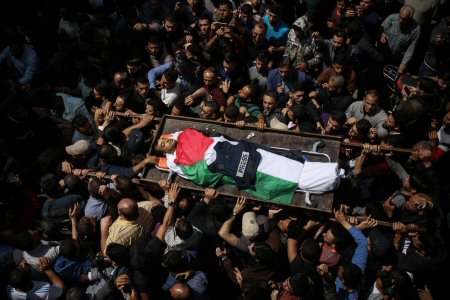 The journalist Yasser Mortaja, killed by Israeli fires at eastern boarder of Gaza strip while covering Great March of Return.

The Palestinian Ministry of Health stated, Wednesday, that about 33 Palestinians were killed and 4,279 injured by Israeli occupation fire since the beginning of Great March Return on 30 March, along Gaza’s borders.

The ministry explained, in a statement, that three children were killed while 642 children and 243 women sustained injuries.

The statement additionally explained, according to Al Ray, that 1,539 Palestinians were shot with live bullets, 388 with rubber bullets, 478 sustained other injuries, 1,878 inhaled teargas, and 459 of were hospitalized.

Israeli occupation forces attacked journalists crews who were covering the events; the journalist Yaser Mortaja was killed by Israeli fire along Gaza border, along with 66 other reported injuries among journalists.

The Great March of Return was launched on 30 March, 2018, along the eastern border of Gaza Strip, and will last to next 15 May, by commemorating the 70 anniversary of Palestinian Nakbah.

Thousands of Palestinians will participate in the march, calling for their inalienable right of return.

The march was designated to be a peaceful event, however Israeli occupation forces resort to excessive use of force against the peaceful Palestinian protesters.

In related news, the Palestinian Ministry of Education and Higher Education asserted that Israeli sharpshooters have shot 84 school students during the  protests.

The ministry pointed out that, after more than three weeks of protests, it recorded the injury of 84 school students, with seven seriously injured, 57 moderately injured, and 20 slightly injured.

It added that it is clear that the Israeli occupation used all sorts of explosive live ammunition and toxic gas canisters, as was shown through the examination of the types of casualties.

Most of the injuries have been in the neck, chest, abdomen, and in the upper parts of the body, while others have been subjected to fractures in the limbs, the ministry noted.

The ministry emphasized that the extent of injuries proves that the Israeli sharpshooters stationed along the eastern border of Gaza deliberately target Palestinian children, in a grave violation of international law and human rights.

The ministry has launched a comprehensive plan to care for the wounded students in health, guidance and academic aspects. In addition, it is designing a computerized program which will be used continuously, by schools, to make the ministry aware of the new developments related to the conditions of students.

The Undersecretary of the Ministry of Education and Higher Education in Gaza, Ziad Thabet, decried Israeli violations against Palestinian children and school students, calling upon the international community and human rights institutions to urgently intervene and save the children and students of Palestine from further attack.