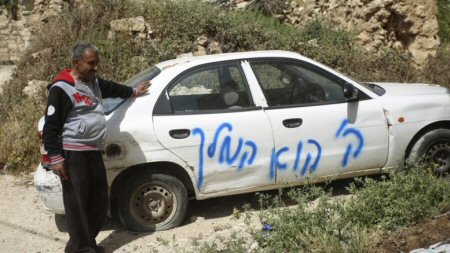 A resident of the Palestinian village of al-Sawiyeh stands next to his car after it was vandalized by settlers on April 17, 2018. Photo credit: WAFA/Ayman Noubani

In the early morning on April 17, 2018, dozens of armed settlers attacked the neighboring Palestinian villages of al-Lubban al-Sharqiya and al-Sawiya in the West Bank district of Nablus.

The settlers slashed the tires of 30 Palestinian owned cars and broke their windows. They spray painted cars and walls with racist graffiti, including the phrases “expel or kill,” “enough with administrative detention orders,” and “God is king.” The settlers also wrote “Price Tag” – a settler term used in reference to attacks that are staged against Palestinians with the intent of terrifying them so deeply that they flee their homes.

Indeed, soldiers have been intensively raiding the village in recent weeks. Moreover, the Palestinian News and Info Agency reports that despite such spectacular property damage, no soldiers or any kind of Israeli officials have attempted to investigate the incident.

A similar attack took place in the same area less than a week ago. On April 13, 2018, two settlers attempted to burn down Sheikh Saada Mosque and vandalized it with racist graffiti in Aqraba village in the Nablus district.

The settlers were captured on surveillance cameras dousing the entrance to the Mosque with lighter fluid, setting it on fire, and then fleeing the scene.

The Mosque was saved thanks to dozens of locals who stopped the fire. The entrance to the Mosque, however, was damaged. The words “death” and “price tag” were also spray painted on the Mosque.

Palestinian Minister of Religious Affairs Yousef Adeis called the attack against the Mosque part of an overall Israeli assault against Muslims and Christians in Palestine. He added that this is the consequence of a campaign of systematic incitement against religious sites, such as al-Aqsa and Ibrahimi Mosque in Hebron.

The recent attacks, which occurred days apart and in the same area, has created a state of anxiety in the villages in the southern area of the Nablus district.