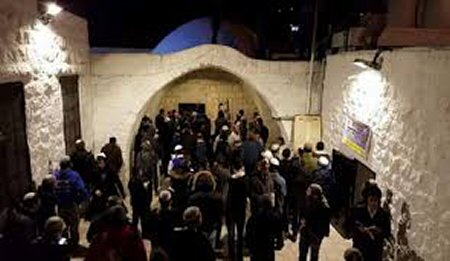 Dozens of extremist Israeli settlers stormed Al-Aqsa mosque from Al-Magharba gate, under the protection of the Israeli occupation police, on Sunday morning.

Police opened Al-Magharba gate at 7:30 a.m. and deployed its units in the mosque compound and gates, in protecting the Israeli settlers.

According to an eyewitness who worked in the Awqaf department, around 115 extremist Israeli settlers stormed Al-Aqsa mosque in the morning and organized provocative tours in its compound, under police protection.

In the early morning, dozens of Palestinian worshipers, from Jerusalem and the occupied territories, came to the mosque to recite Quran. They confronted the setters with chanting.

Israeli settlers and forces, except on Friday and Saturday,violate  the sanctity of Al-Aqsa mosque in an attempt to control the area.

Recently,  Israeli settler attacks increased against Al-Aqsa. In July alone, more than 3,213 settlers stormed the mosque, calling for mass attacks in order to commemorate the anniversary of the so-called “Ruin of the Temple.”

According to 0404 Israeli website, the settlers came to perform Talmudic rituals.

According to an eyewitness, bulldozers raided the eastern area of the city and deployed in the streets around the tomb, especially Amman Street, in order to protect the settlers.

Dozens of buses reached the place with hundreds of settlers, protected by the Israeli patrols who came from Beit Forek checkpoint, in eastern Nablus.

Jews allege that Joseph Tomb is a sacred place for them, because it contains the Prophet Joseph’s bones; however, archaeologists affirm that the tomb existed just a few centuries ago, as they expect that the tomb is for Sheikh Yousef Al-Dweikat.