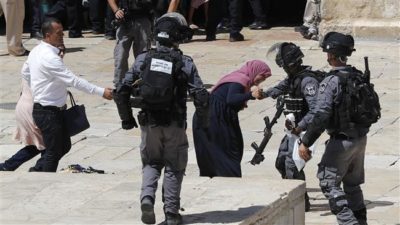 According to local sources, hundreds of Jewish Israeli settlers, accompanied by soldiers, forced their way into the Al-Aqsa Mosque compound on Monday, pushing aside the Muslim worshipers and the Muslim clerics who oversee the Mosque.

They call for the mosque to be destroyed, and a Jewish temple to be erected in its place. Many of these groups sell t-shirts and other paraphernalia showing the mosque destroyed with a temple constructed on the ruins. Some of the vendors selling these items establish themselves directly outside the gates of the mosque, to try to provoke Muslim worshipers as they enter to pray.

Hamas spokesman Fawzi Barhoum issued the warning in a press release on Monday, calling the recent invasions of the al-Aqsa Mosque compound ‘provocations’ meant to insult and denigrate Palestinians who pray at the mosque each week.

Barhoum called on Palestinians in occupied East Jerusalem and the West Bank to increase their resistance to the ongoing Israeli violations of Palestinian sovereignty and basic human rights.

The Hamas spokesman also urged Arab and Muslim countries to support Palestinians in the occupied territories and to pressure their governments to speak out against Israeli violations at the al-Aqsa Mosque.

According to the Islamic Waqf which runs the Mosque compound, Israeli police detained four Palestinian worshipers during Monday’s invasion, but did not specify the reason for their detention.

At that time, 432 settlers, including students of Talmudic yeshivas, broke into the holy mosque under the protection of Israeli police and conducted tours — pointing out places where they could engage in demolition in order to achieve their goal of destroying the mosque.

The settlers also performed Talmudic rituals and prayers at the holy site.

Israeli authorities tightened access restrictions for Palestinians wishing to enter the mosque, under the pretext of securing protection for the settlers.

For Muslims worldwide, Al-Aqsa represents the world’s third holiest site. Adherents of one sect of Judaism call the site  the “Temple Mount,” claiming it was the site of two Jewish temples in ancient times.

According to Press TV, Israel occupied East Jerusalem — in which the Al-Aqsa is located — during the 1967 Middle East War. It formally annexed the entire city in 1980, claiming it as its capital — a move never recognized by the international community.